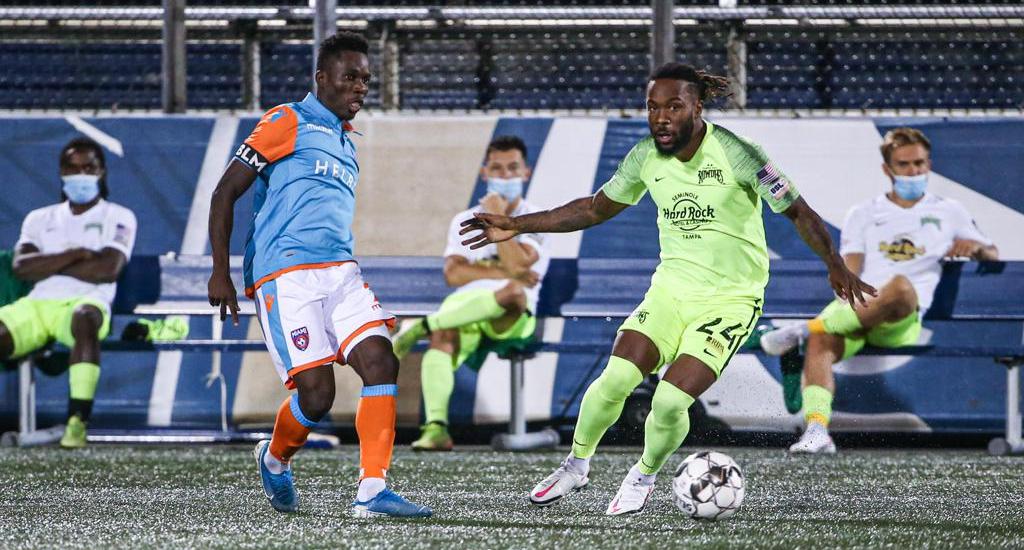 MIAMI (September 26, 2020) — A match which started over two hours and a half after it’s slated kickoff time due to a lightning delay, saw Miami FC lose to the Tampa Bay Rowdies 1-0 at Riccardo Silva Stadium.  A first-half goal by forward Sebastian Guenzatti lifted the away side to victory.

Goalkeeper Mark Pais was called upon twice in the first 20 minutes, as forward Kyle Murphy and Guenzatti both saw their attempt denied by the keeper. Pais first made a diving stop to his right on Murphy’s shot, with the second save coming from point blank after a great first touch by Guenzatti.

With the clock reaching the 26th minute, Miami FC would have their clearest chance of the night. A great build up by the home side found midfielder Tomas Granitto alone just outside the 6-yard box. The El Salvador international muffled his shot, and it went well wide of the goal.

Tampa Bay would score the lone goal of the match in the 37th minute. Defender Jordan Scarlett headed a corner kick back into the heart of the box, finding the Uruguayan in front of goal, who sent his header to Pais’ right to make it 1-0.

Up next, Miami FC will host Charleston Battery on Wednesday, September 30 at Riccardo Silva Stadium. They then will host ATL UTD 2 on Sunday, October 4 in the season finale. 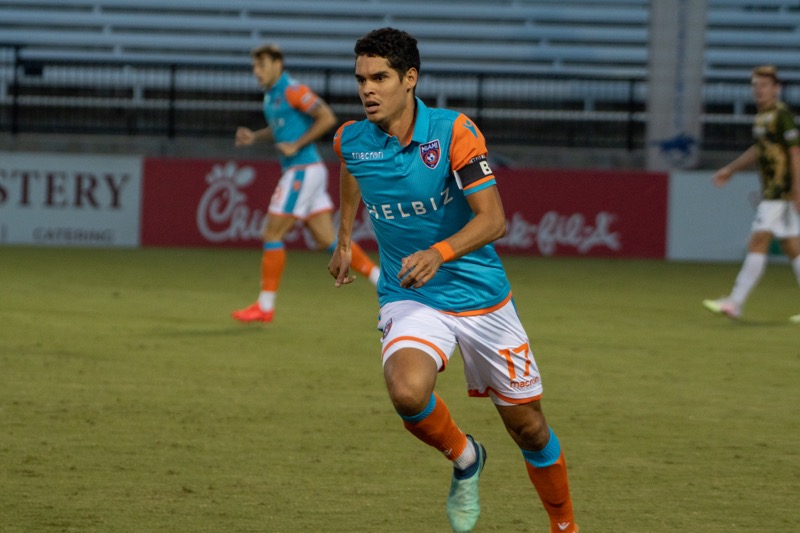 MATTHEWS, NC (September 23, 2020) — The Miami FC played to a scoreless draw on Wednesday night against Charlotte Independence at The Sportsplex at Matthews. The 0-0 draw earned Miami their first clean sheet of the 2020 USL Championship season.

The first half saw both teams generate several chances, but it was Charlotte who would come knocking first as forward Derek Gebhard has his one-on-one shot denied by goalkeeper Mark Pais in the 5th minute.

Moments later, forward Prince Saydee created a crafty individual run on the left flank, but the Liberian’s shot would go wide right, foreshadowing many of Miami’s chances that would be to come.

Pais would be called back to action in the 11th minute, this time making a phenomenal save on midfielder Brunallergene Etou. The midfielder hit a volley off a corner kick clearance and in the last moment, Pais extended his hand to send the shot out for a corner kick.

Miami’s goalkeeper continued his strong performance with another good save on Gebhard in the 16th minute. After the initial push by the home side, Miami was able to settle in the match and began applying the pressure in Charlotte’s half.

Chances by both midfielders Tomas Granitto and Vincent Bezecourt seemed like they would put Miami ahead on the scoresheet, but both of their shots were off target keeping the match scoreless at the half.

Miami FC struggled to create chances in the second half, but were able to focus on defending the clean sheet.

The visiting side was lucky to not concede in the 62nd minute as forward Valentin Sabella blasted a shot off the right post of Pais, who had no chance at the strike.

Miami FC closed the match with a save by Pais after forward Christian Chaney was not able to get power on a head just outside the six-yard box.

Miami FC will now host the Tampa Bay Rowdies, as they look to play spoiler in Group H, The match at Riccardo Silva Stadium will take place this Saturday, September 26 at 7:30 p.m. 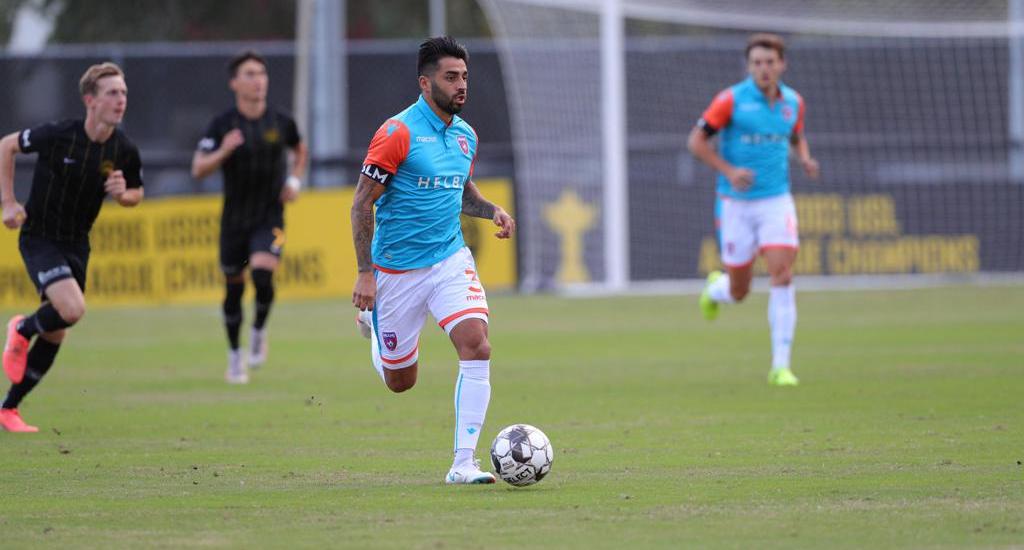 MOUNT PLEASANT, SC (September 20, 2020) — The Miami FC lost on Sunday evening 2-0 against Charleston Battery, as the home side clinched a playoff spot, leaving Miami FC officially out of playoff contention.

19 minutes into the match, Charleston would make it 1-0 off a Zeiko Lewis left footed shot over goalkeeper Mark Pais. Midfielder Leland Archer floated a through ball into the 18-yard box, which the forward was able to capitalize.

A minute later, Midfielder Vincent Bezecourt thought he had found the equalizer, but his first shot was blocked by his own teammate forward Miguel Gonzalez, with the France native sending a header wide right on the ensuing rebound.

In the dying moments of the first half, Charleston would double their lead as forward Nicque Daley took advantage of a defensive mishap. A soft pass by defender Brenton Griffiths forced Mark Pais to come off his line, but Charleston’s forward beat the goalkeeper to the ball and slotted his shot into the empty net.

Miami FC once again found energy off the bench in the second half, like in previous matches, especially with forward Prince Saydee entering the match. The Liberian was able to beat his defender several times in the final 20 minutes of the match, nearly cutting the home side lead, but in both opportunities he would see his shots fail to hit the back of the net.

Miami now will travel to North Carolina to face Charlotte Independence this Wednesday night, and then hosting the Tampa Bay Rowdies on Saturday, September 26. 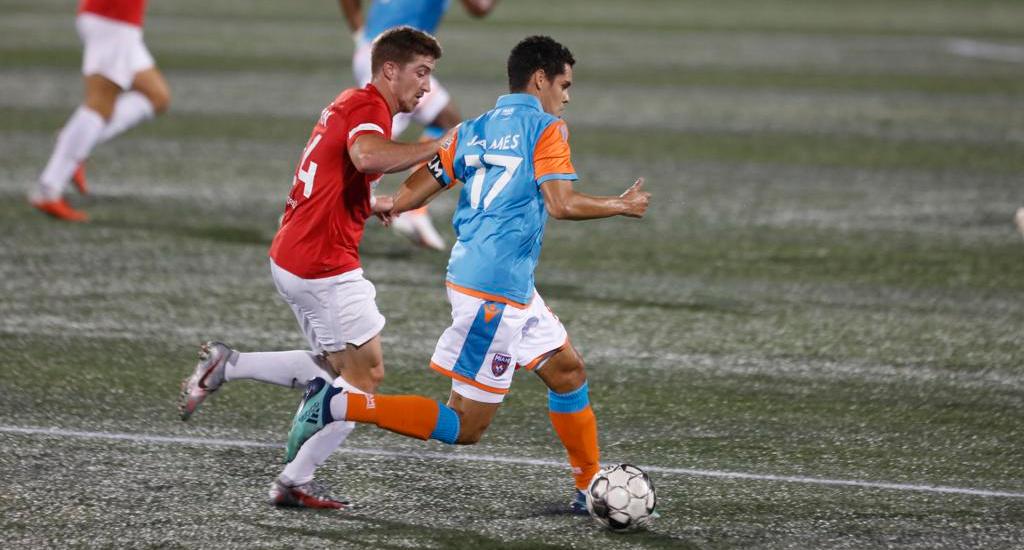 MIAMI (September 16, 2020) — The Miami FC saw their playoff hopes vanish on Wednesday night as they lost 4-0 to Birmingham Legion at Riccardo Silva Stadium. Three first-half goals put the away side up in the first half, with Miami FC chasing the result for the remainder of the match.

Miami FC found the first chance of the night as the game reached the 20th minute, with a perfect cross by midfielder Vincent Bezecourt finding defender Hassan Ndam. The Cameroon-born defender sent a powerful header towards the goal but it went inches over the bar.

With both teams fighting for possession, Birmingham Legion would be the one who would strike first. Forward JJ Williams sent a cross into the heart of the box in the 38th minute, finding a wide open Neco Brett. The forward took a touch and put his finish past a diving Mark Pais.

Birmingham sealed the match several minutes later with a brace from defender Alex Crognale. The first goal came off a perfectly executed corner kick, with the defender sending his header to Pais’ far post, leaving him no chance to make a stop. Moments later, Crognale would extend the lead to 3-0 as he capitalized on a rebound produced after a Pais save.

Just over ten minutes into the second half, a defensive mistake by Pais would gift Brett his second of the night. Miami FC was unable to produce much after that goal, despite holding most possession of the ball. Miami FC did have one clear chance despite being down 4-0, as forward Mohamed Thiaw headed a ball off the crossbar minutes after the fourth goal, with the ensuing rebound being shot over the bar by midfielder Brian James.

With this result, entering the USL Championship Playoffs is no longer an option for Miami.

Miami FC will now travel to Charleston on Sunday to face the Battery. Kickoff is set for 6 p.m.