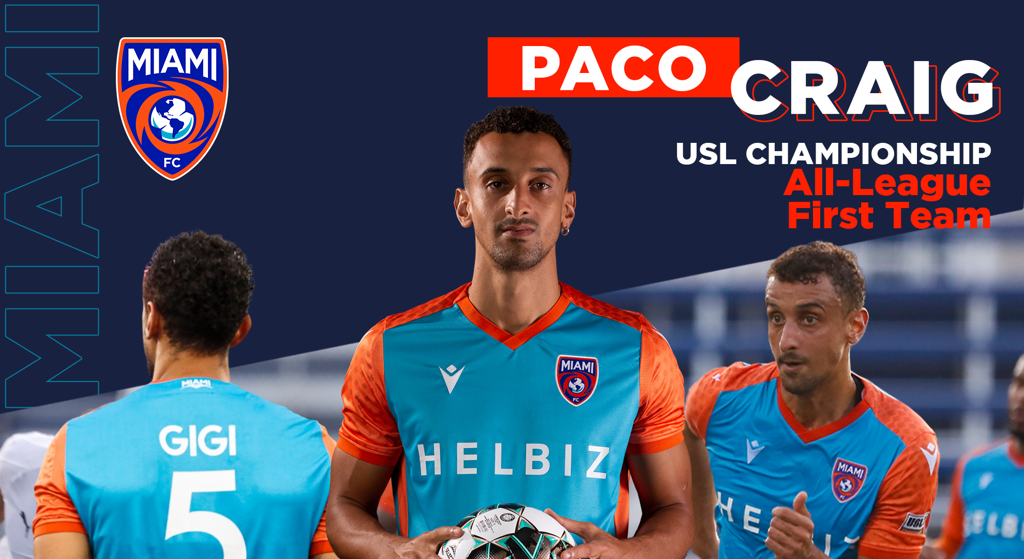 MIAMI (November 23, 2021) -- The Miami FC defender Paco Craig has been named to the USL Championship All-League First Team, the league announced on Tuesday.

The 2021 USL Championship All-League Team was voted on by club management and a league-wide media panel that included representation from every USL market.

"I am extremely happy for receiving this honor," said Craig. "This award is a testament to the hard work and sacrifice of the whole team, not just me. It feels amazing to come back to the USL Championship and be able to earn a spot on the All-League First Team. I have huge respect for my teammates and without them this wouldn't be possible. I am looking forward to growing off this and using it as fuel in our upcoming 2022 season."

Craig returned to the league in 2021 and earned a third All-League First Team selection as he starred in the center of Miami's back line. The English center back finished tied for the league-lead among defenders with 198 recoveries and fourth overall with 134 clearances, while also posting a 63.9 percent duel success rate and 62.6 aerial duel success rate, earning a +7.50 Goals Added mark to lead all center backs in the Championship.

The finalists for the 2021 Championship Awards will be announced on Tuesday, preceding the 2021 USL Championship Final, which will air live on ESPN, ESPN Deportes and SiriusXM FC in the United States on Sunday, November 28 at 8:30 p.m. ET.

GK – Evan Louro, Tampa Bay Rowdies: In his second season in Tampa Bay, Evan Louro led the Championship with 14 shutouts – good for second-most in a regular season in league history – and posted a 0.74 goals-against average while playing 31 of 32 regular season games for the Atlantic Division winner.

D – Paco Craig, Miami FC: Making his return to the Championship in Miami, Paco Craig earned a third All-League First Team selection as he starred in the center of his new club’s back line. The English center back finished tied for the league-lead among defenders with 198 recoveries and fourth overall with 134 clearances, while also posting a 63.9 percent duel success rate and 62.6 aerial duel success rate, earning a +7.50 Goals Added mark to lead all center backs in the Championship.

D – Jonathan Gomez, Louisville City FC: The 18-year-old standout had a remarkable year that saw him named in the preliminary roster for the United States to the 2021 Concacaf Gold Cup, and individually Jonathan Gomez proved a standout two-way player for LouCity as he recorded two goals, eight assists and 44 key passes offensively while recording 43 interceptions and a 75 percent tackle success rate defensively.

D – Forrest Lasso, Tampa Bay Rowdies: Voted to the All-League First Team for a fifth consecutive season, Forrest Lasso was the centerpiece of a three-man back line that was the best defense in the league for Tampa Bay. Lasso led the league with 153 clearances and 132 aerial duels won, the latter coming at a 73.3 percent success rate, while also winning 67.7 percent of duels and blocking 26 shots.

D – Sean Totsch, Louisville City FC: LouCity stalwart Sean Totsch was one of only three players to play every minute of the regular season as he earned his second consecutive All-League First Team selection. Totsch completed a league-high 1,765 of 2,079 passes in the regular season while also recording 195 recoveries and winning 114 aerial duels – second among defenders – at a 69.5 percent success rate as LouCity faced a league-fewest 263 shots.

M – Jorge Hernandez, LA Galaxy II: The 20-year-old playmaker had a breakthrough season for Los Dos as he recorded 12 goals and six assists while leading the league with 91 chances created in the regular season. Hernandez’s play helped propel the Galaxy II attack as he finished with the highest Expected Assists mark in the league at 8.52xA while tying for the league lead with three goals directly from free kicks and a league-high five goals from outside the penalty area.

M – Aodhan Quinn, Phoenix Rising FC: One of the league’s major offseason moves as he joined Phoenix, Aodhan Quinn earned the second All-League First Team selection of his career with a standout season for the Pacific Division winners. Quinn finished tied for second in the league with 11 assists and notched six goals for Rising FC while ranking second in the Championship with 84 key passes and second on Rising FC with a +7.89 Goals Added mark.

F – Sebastian Guenzatti, Tampa Bay Rowdies: The Rowdies’ captain earned his first All-League First Team selection as he scored a career-best 21 goals in the regular season while also recording six assists to lead the club in both categories. Sebastian Guenzatti’s work-rate as the first line of defense also drew plaudits throughout the season as he recorded 24 interceptions and notched a Goals Added mark of +10.86 to lead all players in the Championship.

F – Santi Moar, Phoenix Rising FC: The Spaniard had a career-high 16 goals in his second season with Rising FC, leading the team, while also recording four assists and 63 key passes to sit tied for fourth in the league. Santi Moar’s decision-making in the final third also played a major role in Rising FC’s success as he completed 49 dribbles and recorded four goals from beyond the penalty area, tied for second in the league.