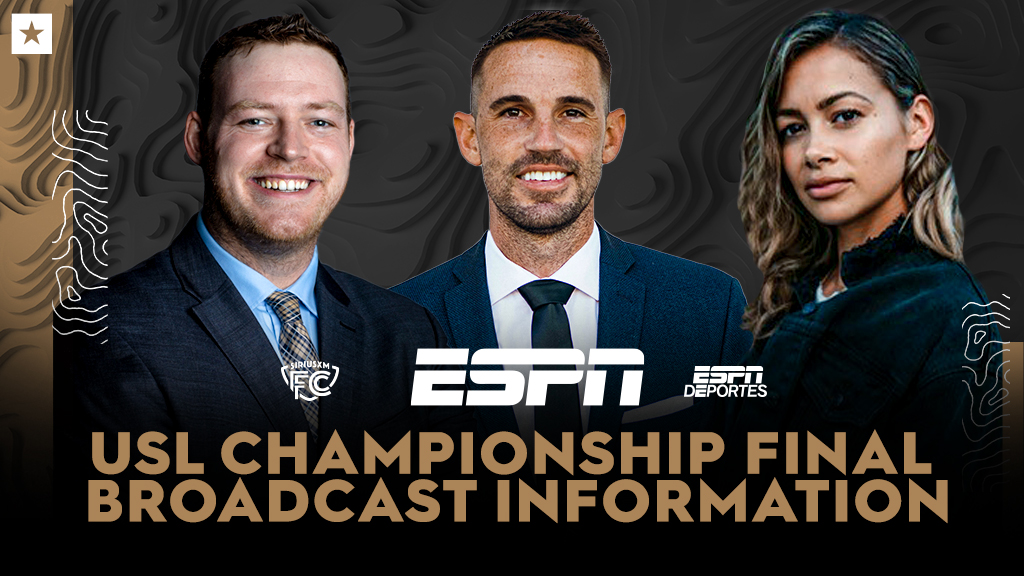 The English-language announce team for the Championship Final consists of play-by-play host Mike Watts, the USL's lead voice on ESPN since 2015, lead analyst Devon Kerr, and field level analyst Sarah Gorden, a Chicago Red Stars defender who will compete for the NWSL Championship this Saturday against the Washington Spirit. Audio of the trio’s call on ESPN will be simulcast on SiriusXM FC (Ch. 157).

Calling the match in Spanish on ESPN Deportes are Jesús Eduardo Acosta and José Armando Rodríguez, who together bring nearly 30 years of experience announcing fútbol, including the USL.

Saturday’s Eastern and Western Conference Finals, both shown live on ESPN+, will determine the two clubs that will vie for the 2021 league title: Tampa Bay Rowdies vs. Louisville City FC at 7:30 p.m. ET and Orange County SC vs. San Antonio FC at 10 p.m. ET / 7 p.m. PT. Based on regular season records, the winner of the Eastern Conference title will play host to the 2021 USL Championship Final.

“This national triple-cast gives the Championship Final tremendous reach, and we are thrilled to have announcers with such impressive credentials and deep familiarity with the USL,” said Erik Barnhart, USL Senior Vice President of Media. “Both the English- and Spanish-language teams can speak to the broad audience we expect to watch this match while conveying the storylines, tactics, key moments and magnitude of this event.”

Watts will provide commentary for his sixth USL Championship Final. The match caps a calendar year in which Watts will call eight domestic and international finals, including the U.S. Men's National Team's triumphs in the 2021 Concacaf Nations League and the 2021 Concacaf Gold Cup. Watts has led coverage of Concacaf's most prominent club and national competitions since 2016, including calling the 2020 SCCL Final on Fox Sports. In addition, Watts also works on ESPN's soccer portfolio, Cincinnati Bengals television broadcasts, Westwood One's College Football Game of the Week, and is a public address announcer at Madison Square Garden.

The USL Championship’s lead analyst since 2018, Kerr is also co-host of USL All Access on Sirius XM FC alongside Watts. Kerr serves as lead analyst for the NCAA Men’s College Cup, and an analyst for Concacaf events such as FIFA World Cup Qualifying and the Scotiabank Concacaf Champions League. In 2019, Kerr was the only individual to provide analysis of each round of the Lamar Hunt U.S. Open Cup, including at field level for the final from Mercedes-Benz Stadium. Kerr also appears on ESPN, NCAA, EA Sports and MLS platforms. He played collegiately at Stetson University and competed in the Germany’s Regionalliga with Altona 93.

Gorden will serve as the pitch level analyst, drawing upon her experience working for Big East productions. As a standout defender for the NWSL finalist the Chicago Red Stars, Gorden this year became the first player in club history to play every minute of every game. Gorden has been called into two U.S. Women’s National Team camps.

Acosta served as the Spanish-language voice of Phoenix Rising FC in 2017 & 2018, and of New Mexico United in 2019 before becoming a member of the USL Championship’s national broadcast crew in 2020. He also called the 2019 USL Championship Final. In addition, he is part of the Fútbol de Primera Radio crew, where he has participated as a play-by-play voice for the 2018 FIFA World Cup in Russia, the 2019 and 2021 Gold Cup, and the Qatar 2022 CONCACAF World Cup Qualifiers.