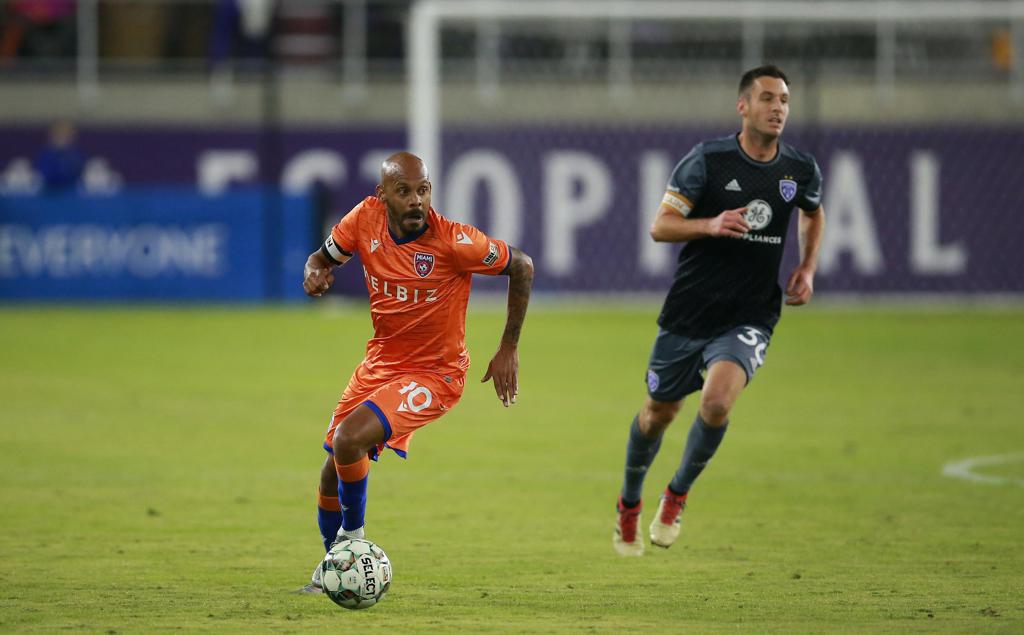 A second-half goal by Jorge Gonzalez in his postseason debut proved the difference as Louisville City FC took a 1-0 victory against Miami FC to advance on Saturday night before a crowd of 9,097 at Lynn Family Stadium in the Eastern Conference Quarterfinals of the 2021 USL Championship Playoffs, presented by TwinSpires.

Facing its hosts for the first time, Miami almost got out to an ideal start when Cuban forward Ariel Martinez outran LouCity’s Sean Totsch to get to a misplaced pass into the left channel, but was unable to direct his chipped finish on target as Louisville goalkeeper Chris Hubbard came off his line well to head off the opportunity, forcing Martinez to his right as cover arrived before the shot.

LouCity got its own early look at goal, too, as in the fifth minute a ball into Cameron Lancaster by Oscar Jimenez gave the English marksman a chance to fire to the left corner that Miami goalkeeper Jeff Caldwell got down well to save. The danger the visitors could create was on display again 10 minutes later, though, when former LouCity player Richie Ballard was played into the left side of the penalty area by Pierre Da Silva but sent his finish into the near side-netting.

The hosts looked to up the tempo as the half-hour mark neared as both Corben Bone and Gonzalez had efforts saved, but then in the 30th minute LouCity came the closest it had to taking the lead. An initial shot from the top of the penalty area by Brian Ownby was blocked but was followed by a powerful effort by Jonathan Gomez that Caldwell parried. Paolo DelPiccolo seized on the rebound but was also denied by the goalkeeper before his second effort trying to center from close to the byline was gathered, ending the danger.

Miami had its own goalmouth scramble three minutes later when off a corner kick from the right a flick on by Bolu Akinyode was directed on target by Callum Chapman-Page, forcing an excellent save by Hubbard as he clawed the ball away off the goal line. The visitors then threatened again 12 minutes into the second half as another loose pass by the hosts sent Martinez on his way, only this time for the Cuban’s touch to be heavy as he entered the penalty area allowing Hubbard to smother.

As the half progressed, though, LouCity appeared to take more control. A chance for Gonzalez just past the hour-mark was saved by Caldwell, while in the 69th minute a quickly worked move left to find Gomez saw the young standout deliver a low cross that DelPiccolo flicked on target only for Caldwell to be well positioned to make the stop.

With 16 minutes to go, the breakthrough arrived. After Lancaster held up play at the top-left edge of the penalty area, he laid a pass back to Gonzalez, who navigated past one defender before sliding a pass to Bone as he moved into the box. A clever return pass into a central space saw Gonzalez get to the ball first ahead of a convergence of defenders and curl a first-time shot just inside the right post.

Miami tried to find a reply but was unable to find the incisiveness it needed in the final third to produce a chance that might have tested Hubbard. Instead, LouCity could have added a second on a counterattack late in the game as first Antoine Hoppenot and then Gomez passed up chances to put the game away before Miami’s defense recovered. There would be no late drama from the visitors, however, as LouCity moved on in comfortable fashion.