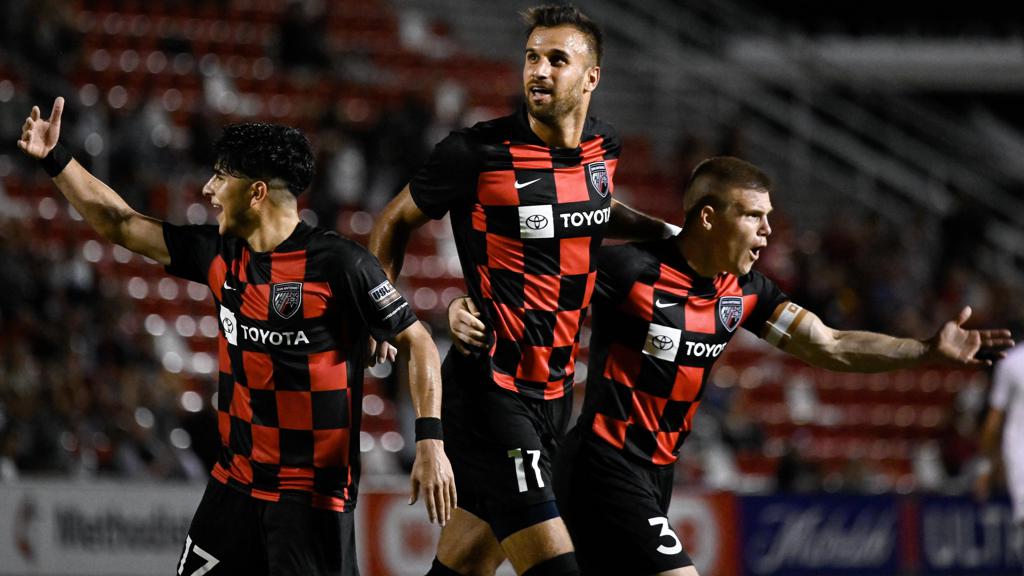 SAN ANTONIO – San Antonio FC produced its best attacking performance of the season as Nathan Fogaca scored twice in the second half to add to goals by Jose Gallegos and Justin Dhillon in a 4-2 victory against Memphis 901 FC at Toyota Field that saw the hosts solidify its bid for second place in the USL Championship’s Mountain Division.

The hosts got out onto the front foot early and carved out a good chance in the sixth minute when an angled cross from the right channel by Marcus Epps picked out Fogaca in the left side of the penalty area for a header to the bottom-left corner that was parried away by Memphis’ Cody Cropper. Fogaca got to the rebound and quickly slipped a pass to Gallegos as the youngster cut into the penalty area, but his shot hit the bottom of the left post and went behind for a goal kick.

Epps also hit the woodwork for SAFC two minutes later as he received a pass centrally and unloaded a shot from 25 yards that rattled the right post. The opening goal came to Memphis, however, as Kyle Murphy latched onto a through-ball down the left and drove into the penalty area before centering to Michael Salazar for a finish inside the six-yard area.

San Antonio hit back on the half-hour mark as Gallegos struck again, receiving a pass inside from the right by Mathieu Deplagne as he entered the penalty area and firing home a dipping shot into the left corner of the net for his fifth goal of the season. The hosts then continued to build pressure on the Memphis goal for the remainder of the half, but the visitors went close to regaining the lead in stoppage time when Niall Logue powered a free kick from 35 yards that deviated through the air and forced San Antonio’s Matt Cardone to palm it over the crossbar.

Gallegos threatened to add a second inside the opening minute after the break as he found space centrally to receive a pass and shoot from 25 yards to the bottom-left corner where Cropper parried the ball wide for a corner kick. San Antonio took the lead in the 54th minute, however, when Epps wove past a pair of defenders on the right edge of the penalty area and cut back a cross for Dhillon, whose shot from 16 yards took a deflection off a defender and found the back of the net.

Dhillon then added an assist 12 minutes later as he played in Fogaca on a counterattack, allowing the Brazilian to power home a finish to the right side of the net for his first goal in more than a month. Fogaca wasn’t done, though, and with four minutes to go he received a pass from Epps just inside the Memphis half on the left and navigated past a defender before driving toward the top of the penalty area and sending a low shot into the left corner of the net from 25 yards.

Memphis was awarded a penalty kick in second-half stoppage time as Jasser Khmiri was whistled for a foul on Mark Segbers that resulted in his second yellow card of the game, reducing the hosts to 10 men before Kadeem Dacres shot just beyond the reach of Cardone to the left corner of the net. The goal proved just a consolation for the visitors as the final whistle arrived soon after to earn the hosts a big home win.

USLChampionship.com Man of the Match

Nathan Fogaca, San Antonio FC – Fogaca struck twice in the second half for his first goals since September 4 and finished the night with seven shots and three key passes as his industry in the final third was rewarded in the end.