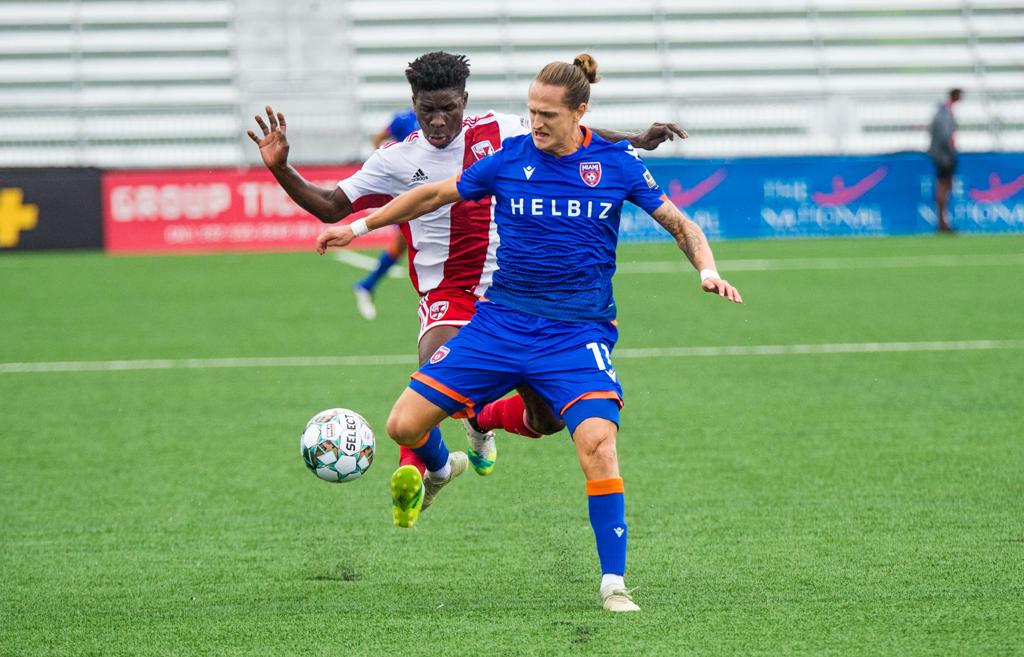 LEESBURG, Va. (October 10, 2021)– Loudoun United FC rallied from a goal down with 15 minutes to go to take a 3-2 victory against Miami FC at Segra Field on Sunday afternoon as Ted Ku-DiPietro had a goal and assist before Jovanny Bolivar scored the winner in the 86th minute in a game that saw both sides finish down to 10 men.

Miami threatened early on as Christiano Francois broke onto a pass over the top into the right channel by Richie Ballard before shooting to the near post where Loudoun goalkeeper Jermaine Fordah saved. The Haiti international put the visitors on top in the 13th minute, though, after a good step up defensively by Othello Bah sent the side on a counterattack that saw the Liberian slide a through-ball for Lamar Walker into the penalty area. Walker played a pass to his right that found Francois, who was brought down by Loudoun’s Houssou Landru in the box, and Francois converted to the left corner from the spot.

Loudoun hit back in the 20th minute on its first shot of the game as Jacob Greene and Ku-DiPietro combined on the right before Di-Pietro returned the ball to Greene at the top-right edge of the penalty area for a shot that picked out the bottom-left corner of the net. But the hosts were reduced to 10 men in the 26th minute as Darluis Paz received his second yellow card of the game after hauling down Francois on a counterattack.

With a man advantage, the visitors tried to regain the lead late in the first half as first Lamar Walker had a free kick from 25 yards out comfortably saved by Fordah, while in the 44th minute Pierre Da Silva had a curling effort from the top of the penalty area deflect off a defender and go just over the crossbar. Miami then might have taken the lead eight minutes into the second half as Francois drove into space in the left channel before beating a defender after a United turnover near the halfway line. Francois slipped a pass to his right as Fordah came off his line to confront him, but Walker’s finish was brilliantly cleared off the line by Robbie Dambrot with a sliding block to keep the game level.

Miami regained the lead with 16 minutes to go as Chris Cortez made an immediate impact after coming on for his debut for the club as a second half substitute with a diving header on a cross from the right by Francois that Fordah got a piece of but couldn’t keep out. A minute later, though, Loudoun hit back as Gaoussou Samake broke onto a pass and was pulled back inside the penalty area by Miami’s Paco Craig, who was sent off to make it 10 versus 10. Ku-DiPietro stepped up to the spot for the hosts and slotted his shot into the right side of the net as Sparrow went the opposite way.

The hosts then took the lead with four minutes to go as Bolivar seized on a slack back-pass by Miami’s Janos Loebe and rounded Sparrow as he charged off his line before simply rolling the ball into the open net. That proved the difference as while Miami tried to find a late equalizer, the hosts held firm to claim their fourth victory of the season.