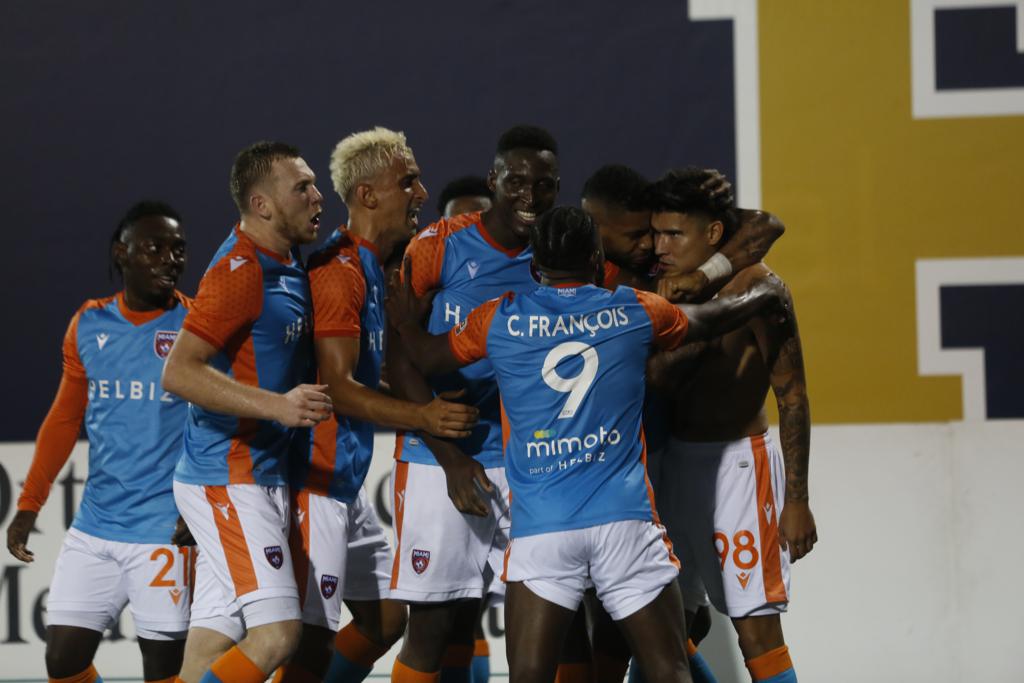 MIAMI (October 2, 2021) -- The Miami FC defeated Pittsburgh Riverhounds SC 3-2 on Saturday night at FIU Stadium, in what was a crucial victory in the battle for the top two positions in the Eastern Atlantic Division.  A goal at the death by forward Pierre Da Silva earned the three points for Miami FC.

Pittsburgh’s midfielder Kenardo Forbes  scored in the 3rd minute from a precise assist from Alex Dixon. Forbes riffles it into the top corner at a tough angle but enough to make it count. Miami’s defensive mistake, allowed the open space putting the away side up early.

Seconds later, forward Lamar Walker scored the equalizer. Pittsburgh’s positional defense looked confused and unorganized on the restart allowing a long ball by defender Sean McFarlane get over the backline and dropping to Walker's feet. The was Walker's 6th goal in the season.

Miami goal helped put the game back to square one. This allowed both teams to regroup and bring back the momentum allowing more shots at goal.

The first half came to an end with consistent pressure from both teams have created chances.Pittsburg is (0-1-1) all-time again this Miami FC squad. They have yet to beat this team.

Miami almost grabbed the lead in the final minute of the first half as Ariel Martinez broke onto a pass by Billy Forbes into the left channel but had his low shot saved by Vitiello, while seven minutes into the second half a sweeping move up the left by the Hounds saw Williamson deliver a curling ball from the flank to Dixon in the right side of the penalty area, only for his shot to go wide of the far post.

Pittsburgh went even closer in the 64th minute as Williams played Cicerone into the left side of the penalty area for a shot that hit the right upright and came out before being cleared by the defense. Two minutes later, though, Forbes struck for his second of the night as Williamson cut inside onto his right foot to deliver a back-post cross from the left that the Jamaican playmaker nodded home.

Looking to at least maintain a three-point gap between themselves and Pittsburgh, the hosts again found a response with seven minutes to go as a crossfield pass from the right by Adonijah Reid found Othello Bah at the top left edge of the penalty area that the Liberian international rifled home just inside the left post.

In the final minute, however, the South Florida side ensured it would end the night ahead of the Hounds as Christiano Francois played an angled through-ball for Da Silva in the left channel as the hosts broke forward that the former U.S. youth international deposited into the bottom-right corner of the net.

This win puts Miami in a strong position. Although Pittsburgh dominated both first half and second half but failed to score the winner goal to place this team at the top of their division. Final score 3-2. Miami FC will face Loudoun United next Sunday, October 10 at home.