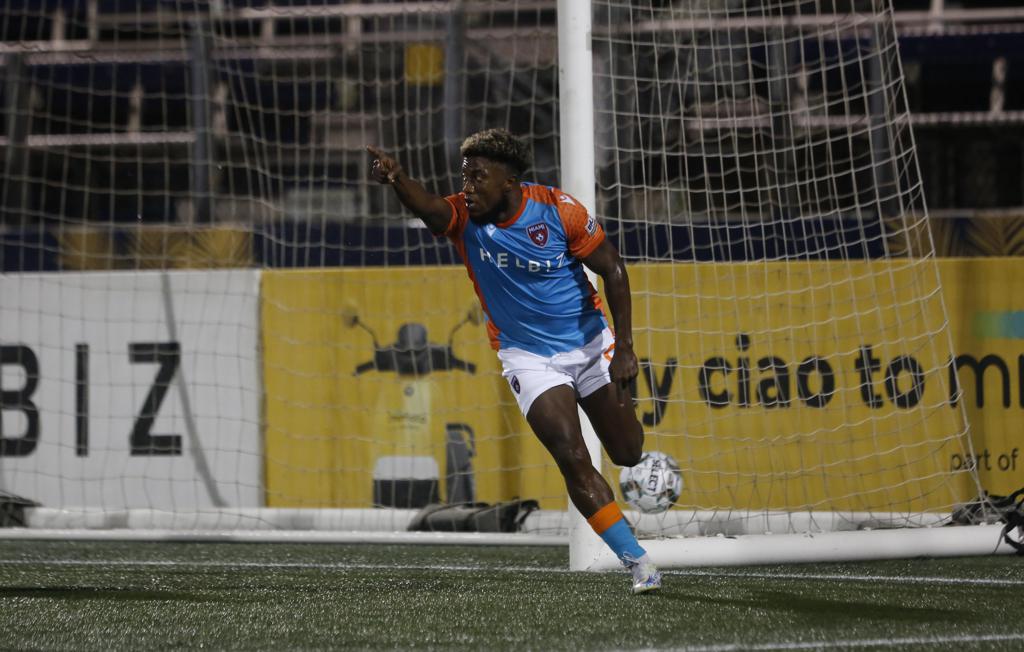 Neither side created a clear early chance, and it wasn’t until the 15th minute that Miami found the net only for Francois to be ruled offside as he tapped home from close range. The breakthrough arrived for the hosts in the 25th minute, though, as Forbes played a pass between Martinez and Lamar Walker that Martinez controlled and then fired left-footed into the bottom-right corner of the net.

Seven minutes later it was Forbes who added the second as Janos Loebe bombed up the left flank to receive a return pass in behind the defense and he centered for the Turks and Caicos international, who controlled and shot home into the right corner of the net. Miami’s scoring flurry then continued in the 39th minute as Walker took a pass from Martinez at the top-left edge of the penalty area and after feinting inside onto his right foot curled a shot into the right side of the net.

Loudoun pulled a goal three minutes into the second half as Ted Ku-DiPietro ran onto a through-ball by Jackson Hopkins into the left channel and cut in front of a covering defender and then past another before sliding a shot into the left side of the net. Two minutes later, Ku-DiPietro threatened again for the visitors as he stole possession in Miami’s half after a throw-in and broke into the penalty area but was denied by a kick-save by goalkeeper Connor Sparrow.

Miami restored its three-goal lead in the 55th minute, however, as Francois added his name to the scoresheet, shooting home from 15 yards out as the hosts recycled possession after Loudoun goalkeeper Jermaine Fordah had punched a delivery into the box clear, where Martinez gathered and fed the Haitian international for a low finish. Francois added his second of the night and Miami’s fifth eight minutes later as he tapped home a low cross from Forbes from the left side of the penalty area.

The visitors continued to battle throughout, but Miami wrapped up its victory with nine minutes to go as Richie Ballard was played into the right side after a good piece of midfield buildup by the hosts, and he fed Adonijah Reid for another close-range finish to wrap up the scoring. El Salvador international Josh Perez almost added his name to the scoresheet too in the final minutes for the hosts, but their victory had long-since been assured.