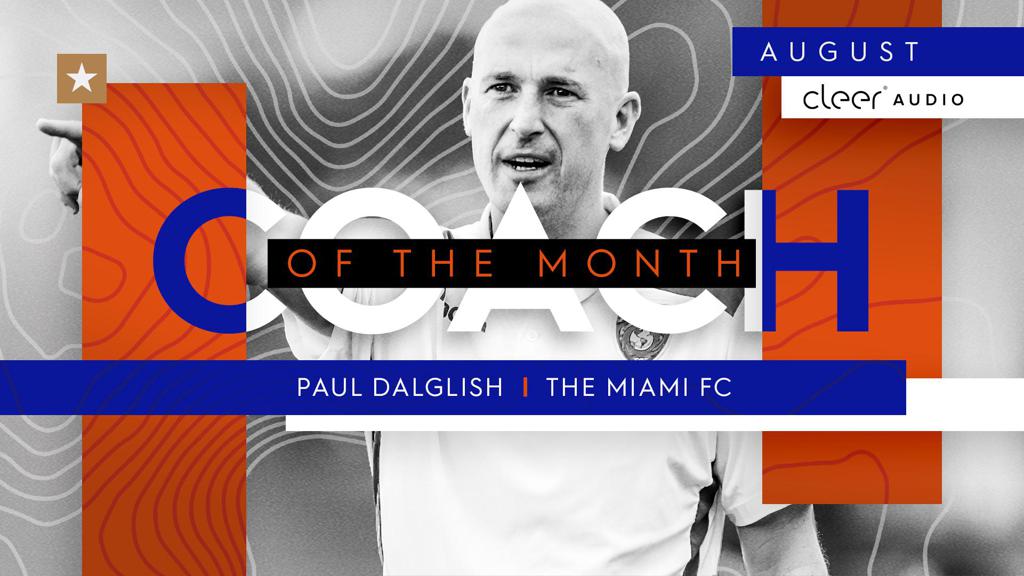 TAMPA, Fla. (August 8, 2021) – Miami FC’s Paul Dalglish has been voted the USL Championship’s Coach of the Month for August presented by Cleer Audio, earning the honor after leading his side to an undefeated month that saw Miami win four times in six games to join the race for first place in the Atlantic Division, while posting impressive comeback victories against division rivals the Charleston Battery and Pittsburgh Riverhounds SC.

In its second season in the Championship, Miami made an up-and-down start to the season as the club’s finishing lagged behind its overall play as the club introduced a large contingent of new faces to the squad including former Championship All-League selections Paco Craig, Speedy Williams and Christiano Francois. Since the start of July, however, the side has clicked into gear. In August, that resulted in impressive victories on the road against Pittsburgh Riverhounds SC and at home to the Charleston Battery in which the side trailed by two goals, only to rally to claim all three points.

The mode of operation hasn’t changed for Dalglish over the duration of the season, but now the results are consistently living up to the performances the side is putting in on a weekly basis.

“The outcome has changed but the process has stayed the same,” said Dalglish. “The most important thing is to have the patience to trust the process. We needed to allow time for the team to develop as we were more or less an expansion team with the amount of new players [we had]. Next year, we expect things to come together much quicker.”

Miami is currently in third place in the Atlantic Division after another comeback to earn a 2-2 draw with the Charlotte Independence this past Saturday, which moved the club’s undefeated streak to seven games overall. The side sits six points behind second-placed Pittsburgh currently but has two games in hand with 10 games to go in the regular season that could make the race for a home playoff game in the USL Championship Playoffs in November one that goes to the wire.

“Every game now is one-and-done playoff mentality,” said Dalglish. “We are not too concerned about the ten games as a whole, rather taking every game as a new challenge. If we look too far ahead, we might not take care of the games in the short term. If we have that attitude now, we don’t need to change our mentality when the playoffs come around.”

Dalglish received 68 percent of the vote to take the fourth monthly award of the season. The Tampa Bay Rowdies’ Neill Collins finished in second on 27 percent after leading his side to four wins in five games while only conceding one goal during an undefeated month, while Colorado Springs Switchbacks FC’s Brendan Burke finished third after leading his side to a five-game undefeated streak to end the month while leading the Championship with 18 goals in August overall.