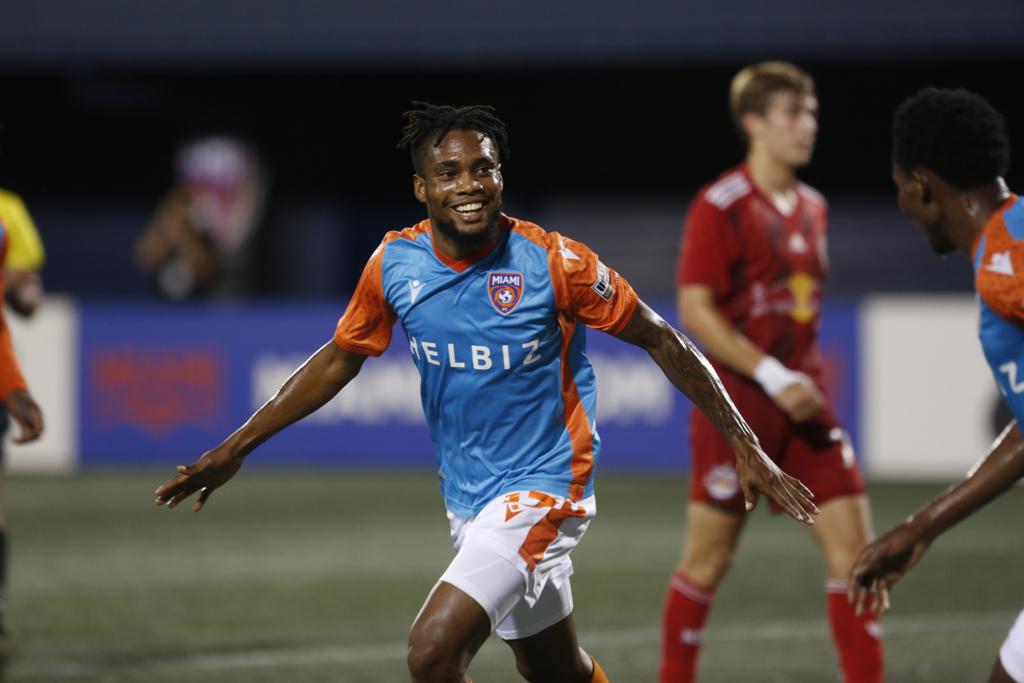 MIAMI (August 29, 2021) – Lamar Walker scored twice after coming on as a second-half substitute as Miami pulled away from the New York Red Bulls II for a 3-0 victory on Sunday night at FIU Stadium, matching the wins by the Tampa Bay Rowdies and Pittsburgh Riverhounds SC on Saturday to keep the hosts within three points of the USL Championship’s Atlantic Division leaders.

New York opened aggressively and went close to opening the scoring in the third minute as Mathias Jorgensen was played into the right side of the penalty area by Jeremy Rafanello but was denied by a kick-save from Miami’s Connor Sparrow. The hosts also had a good early opportunity kept out six minutes later as Adonijah Reid’s corner from the left was headed on target by Paco Craig but parried over the crossbar by New York’s Luca Lewis.

Miami hit the front in the 15th minute, however, as Bolu Akinyode sent Billy Forbes into space on the left on a counterattack and after shuffling past a defender the Turks and Caicos international lashed home a low shot into the right corner for his third goal in the past two games. The hosts threatened again eight minutes later as on another counterattack Othello Bah’s pass was slightly behind Reid after Lewis had come off his line to confront the Liberian forward, allowing Lewis to recover and parry Reid’s shot before the danger eventually passed.

Rafanello forced Sparrow into another good save for the hosts in first-half stoppage time with a powerful free kick to the top-right corner that the goalkeeper parried way for a corner, while early in the second half Reid fired a similar effort from 25 yards to the top-left corner of the net for the hosts that Lewis just turned over the crossbar with a diving save.

Miami doubled its lead with 19 minutes to go as second-half substitute Lamar Walker added to his tally for the season after a neat piece of play around and in the penalty area. Christiano Francois began the move as he drifted centrally from the right and lifted a ball into the left side of the area for Bah, who passed first-time inside to the Jamaican international before he cut past a defender and lifted his finish into the net.

The Red Bulls II tried to find a way back into the game but were stymied by Miami’s back line, with a pair of shots from distance by Rafanello the only real threats the visitors posed in the final 20 minutes, the second coming on a free kick with two minutes remaining. New York’s playmaker had one final effort to break the shutout as the game moved into stoppage time with a good curling effort to the top-right corner from 30 yards that Sparrow punched away, but in the fifth minute of stoppage time Walker added his second for the hosts on a breakaway to seal the win and keep Miami in touch with the Atlantic Division leaders.