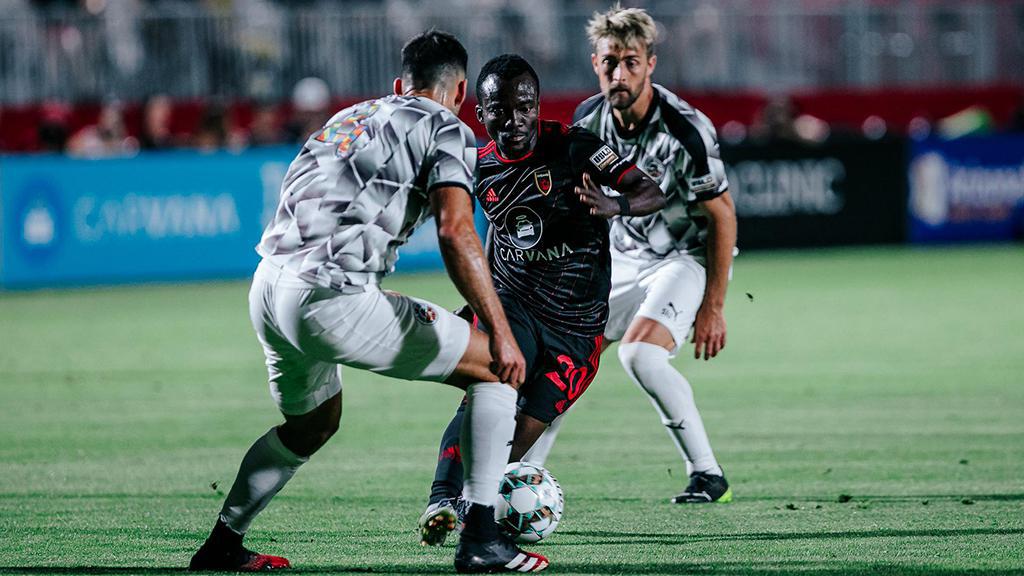 Phoenix Rising FC and Solomon Asante will visit Oakland Roots SC for the second meeting between the clubs this season as Oakland returns to Laney Stadium for the first time in 2021. | Photo courtesy Ashley Orellana / Phoenix Rising FC

OAKLAND, Calif. – Oakland Roots SC will make its official return to Laney Stadium on Wednesday night as it plays host to Phoenix Rising FC in the USL on ESPN Game of the Week with the hosts looking to break out of a tough run of form while facing the challenge of the Pacific Division’s leaders. Kickoff is scheduled for 10 p.m. ET on ESPN2.

@OaklandRootsSC (1-6-3, 6pts) fell in a third consecutive outing on Saturday night as Orange County SC took a 3-0 victory at Las Positas College as the hosts created some chances but were unable to finish in the final third. Oakland is currently on an eight-game winless streak and has scored only once in its last five games, a 2-1 defeat to Las Vegas Lights FC on July 10. The side hopes its return to Laney Stadium – where a new playing surface was laid last week – can inspire the side as it competes at the historic venue for the first time since March 2020, and recent newcomers to the side such as forward Brandon Allen will be looking for their first goal in the club’s colors under the national spotlight.

That could be a tall ask against @PHXRisingFC (10-2-2, 32pts) which is on a three-game winning streak and has won five of its last six games overall after a 3-1 win against Rio Grande Valley FC last Saturday night at Wild Horse Pass. Rising FC got goals from Darnell King, Aodhan Quinn and Rufat Dadashov in the first half, while Arturo Rodriguez recorded a pair of assists to lead the side to victory. The 2019 USL League One MVP, Rodriguez has now recorded four assists and 18 key passes this season, adding another attacking piece to the already prolific Rising FC attack since his offseason arrival. Phoenix is led overall by two-time MVP Solomon Asante, who has eight goals and six assists this season and sits on 49 regular-season goals for his career going into Wednesday night’s contest.