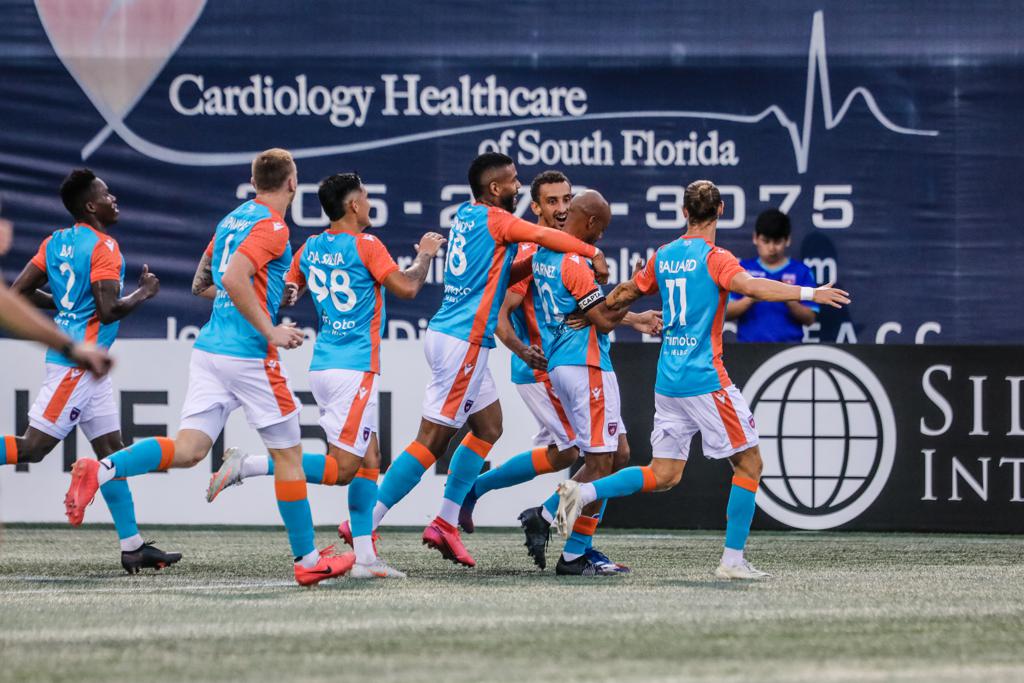 MIAMI – A pair of first-half goals earned Miami FC a 2-1 victory against Florida rival the Tampa Bay Rowdies on Saturday night at FIU Stadium as Miami moved within a point of Tampa Bay at the top of the Championship’s Atlantic Division with the win.

Looking for a second consecutive win against its in-state rival, Miami had an early chance in the eighth minute when Ariel Martinez beat a defender 25 yards from goal and fired a shot to the right side of the net that Rowdies goalkeeper Evan Louro punched away to safety. The Cuban forward capitalized on a loose pass two minutes later to put the hosts ahead, however, as he picked off Conner Antley’s pass and moved into the left side of the penalty area for a shot that tucked just inside the left post.

Tampa Bay almost responded immediately as after Leo Fernandes had a shot blocked, he recycled possession for Laurence Wyke, who cut into the left side of the penalty area and sent a low shot that hit the near post before Miami was able to clear. A few minutes later Wyke almost set up Zach Steinberger with a low cross from the left for a near-post finish that went just the wrong side of the upright for the visitors.

Miami doubled its lead 11 minutes before halftime, however, as Janos Loebe played a pass from the left flank in toward the goal line to find the run of Pierre Da Silva, who controlled and picked out Othello Bah with a cut-back cross the Liberian volleyed home into the right corner of the net. Da Silva then went close to a third as he was played into the left side of the penalty area for a shot from a narrow angle that was well saved by Louro as he pushed it over the crossbar.

The Rowdies made three substitutions at halftime as they looked to turn the game around, including the introduction of Sebastian Guenzatti who almost had an immediate impact with a header that went just over the crossbar off a free kick by Lewis Hilton four minutes after the break. Tampa Bay’s captain went even closer in the 56th minute as he connected with a cross from the right by fellow substitute Sebastian Dalgaard, only for Miami goalkeeper Connor Sparrow to make an excellent low save.

Miami put the ball in the net again a few minutes later but Christiano Francois’ finish was ruled out for offside, and the in the 64th minute the Rowdies got back into the game, halving their deficit. Dalgaard was involved again, taking a pass as he burst down the right side to deliver a cross that found Fernandes in the left side of the penalty area. The winger controlled and then unleashed an outstanding left-footed volley into the right side of the net.

Tampa Bay continued to push for an equalizer as the second half went on, but the visitors were unable to carve out many clear opportunities as Miami looked to close out the game. The closest the Rowdies came was with two minutes remaining when a corner kick was half-cleared to Yann Ekra at the top of the penalty area for a curling shot that went just wide of the right post. Despite a final push in stoppage time, though, the visitors weren’t able to test Sparrow in the Miami net as the hosts came away with its fourth win in the past five games.