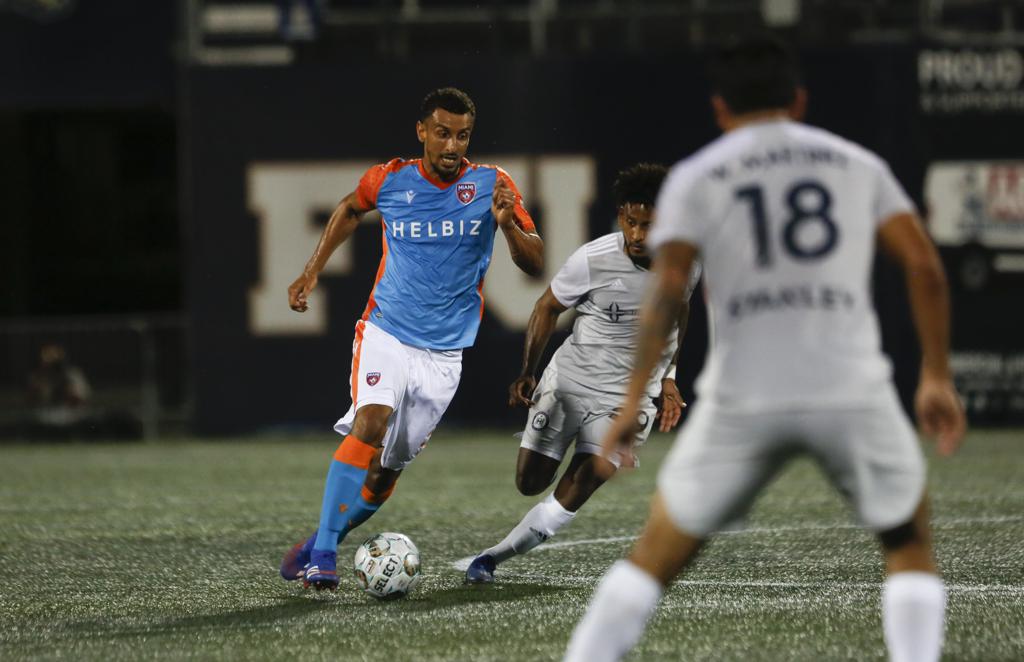 MIAMI (May 8, 2021) -- The Miami FC suffered its first loss of the 2021 USL Championship season on Saturday evening, losing 1-0 to Hartford Athletic in South Florida. Forward Tabort Etaka scored the lone goal of the match in the 59th minute.

Forward Cristiano François was very active in the first half creating several chances for himself, while also providing several through balls to his teammates. In the 21st minute, the Haitian-born midfielder tracked back and recovered a ball defensively to then take it all the way into Hartford's box. His strong cross was just out of the reach of forward Lamar Walker who was arriving at the far post.

Moments later, it was Walker who would find François' incoming run into the box. This time, François took the shot, but it ended up trickling to Hartford's goalkeeper Jeff Caldwell.

As the half was coming to an end, François was able to shake off a Hartford defender before setting up forward Pierre Da Silva inside the box. Da Silva rifled a shot on goal, but it went straight to Caldwell.

Miami FC's goalkeeper Connor Sparrow was called upon early in the second half, having to make an amazing save to keep the match 0-0. Moments later he would be left with no chance on Hartford's goal as Etaka's blistering strike fired past his right hand and into the top corner of the net.

Miami FC immediately retaliated with a chance of their own after Da Silva filtered in a through ball into second-half substitute Billy Forbes. The Turks and Caicos native slipped past an outstretched Caldwell but the ball was poked away from him before he could tap the ball into the back of the net.

Forbes would have another chance to equalize 73rd minute. After taking on and beating a Hartford defender, his shot hit the side netting on the wrong side as Hartford looked to be on their back heel.

Less than a minute later, midfielder Ariel Martinez had a chance of his own, finding space outside the 18. The Cuban's shot seemed to be directed at goal but it ended up going wide left.

Hartford had a couple of chances to double their lead in the final minutes, but the match ended 1-0 to the visiting team. Up next, Miami will have back-to-back away matches, traveling to New York Red Bulls II this Friday, and then visiting their in-state rivals Tampa Bay Rowdies the following weekend.