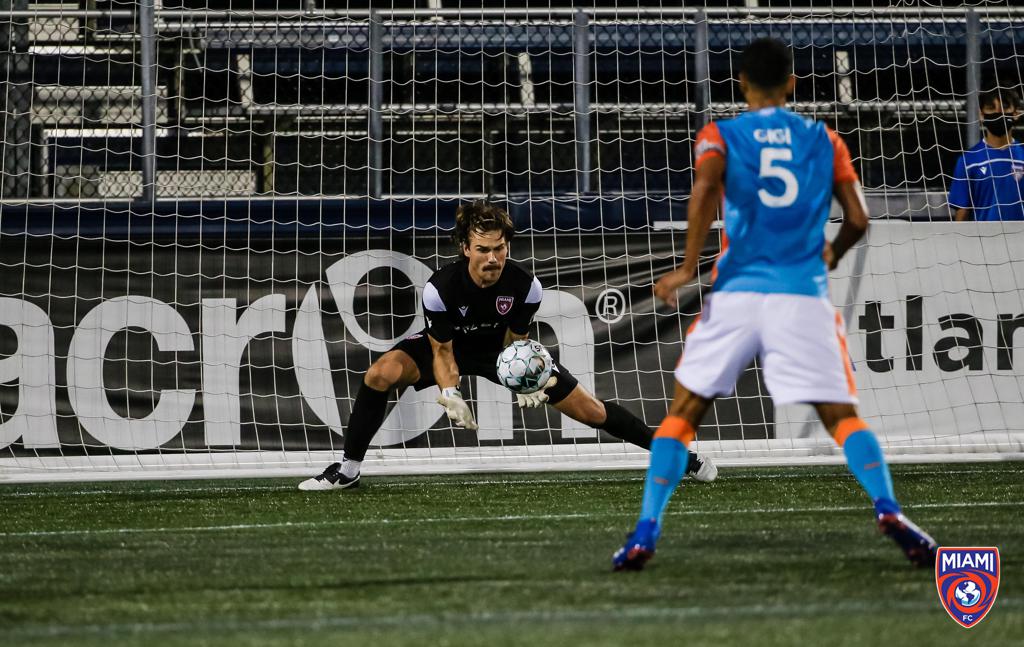 MIAMI (May 4, 2021) -- The Miami FC's goalkeeper Connor Sparrow was named to the USL Championship Week 2 Team of the Week on Tuesday. Sparrow was a key component in Miami's 2-1 win on Sunday over Loudoun United FC.

“The most important thing was securing the three points," commented Sparrow. "Seeing that all the guys sacrificed everything from the gate gives us a lot to build with as we go forward.”

Sparrow recorded eight saves and three punched clearances as he helped Miami hold on for a 2-1 victory against Loudoun United FC despite playing down a man for the final 75 minutes of the contest.

Usually we'll let you have a vote...but, last night @ConnorSparrow24 was on fire!

He's our first Man of the Match of the new @USLChampionship season. pic.twitter.com/DAepIqvG1F

Check out the rest of the USL Championship Week 2 Team of the Week:

GK – Connor Sparrow, Miami FC: Sparrow recorded eight saves and three punched clearances as he helped Miami hold on for a 2-1 victory against Loudoun United FC despite playing down a man for the final 75 minutes of the contest.

D – Jorge Corrales, FC Tulsa: Corrales notched his second assist in as many games, completed 35 of 42 passes overall and three key passes while also winning 9 of 10 duels and recording four interceptions defensively in a 2-0 win against Sporting Kansas City II.

D – Nii Armah Ashitey, Hartford Athletic: Ashitey made seven interceptions and 12 recoveries, won 4 of 5 tackles and 10 of 16 duels in an impressive debut performance at the back for Hartford in its 3-2 victory against the New York Red Bulls II on Friday night.

D – Bradley Bourgeois, FC Tulsa: Bourgeois won 4 of 4 tackles and made five interceptions and 15 recoveries defensively and also completed 36 of 45 passes and 2 of 5 crosses on the ball in Tulsa’s 2-0 win against Sporting Kansas City II.

M – Arthur Rogers, Hartford Athletic: Rogers found the net once and was active throughout in midfield, winning 9 of 15 duels and 5 of 6 aerial duels while recording 13 recoveries and three interceptions in Hartford’s 3-2 win against the New York Red Bulls II.

F – Santiago Patino, San Antonio FC: Making his debut for SAFC, Patino recorded a hat trick and finished with seven shots overall to lead his side to a 3-0 victory against Colorado Springs Switchbacks FC on Saturday night.

F – Sebastian Guenzatti, Tampa Bay Rowdies: Guenzatti powered the Rowdies to an opening-night victory with two goals and one assist in the side’s 3-0 victory against the Charlotte Independence on Saturday night.