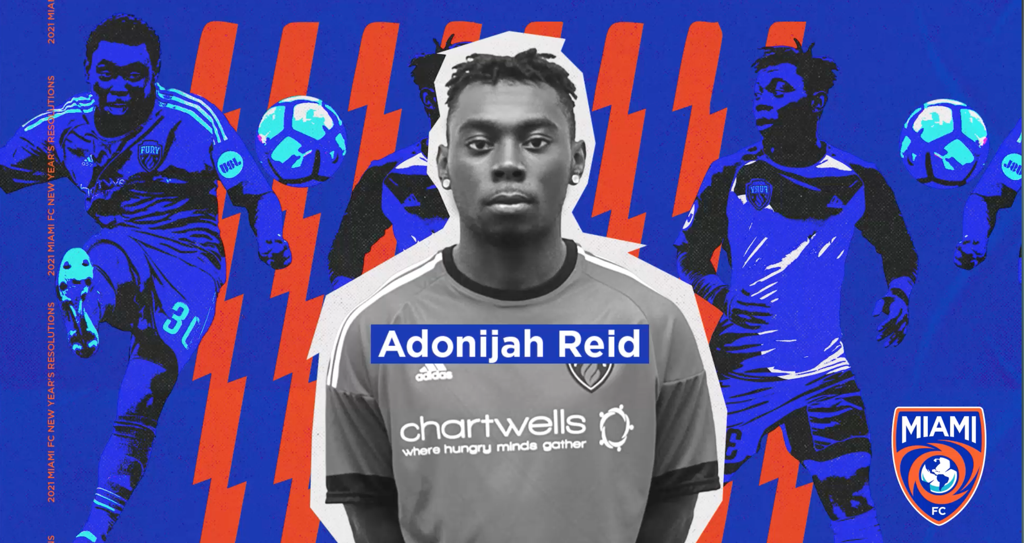 MIAMI (January 22 2021) – The Miami FC have added yet another piece to their attack on Friday, with the signing of Canadian forward Adonijah Reid, pending league and federation approval. Born in Brampton, Ontario, Reid most recently played in France’s Ligue 2 club Le Havre AC.

“Adonijah is a young player who we believe has huge potential,” said Technical Director and Head Coach Paul Dalglish. “He has creativity both 1v1 and with the final pass, while also having great finishing abilities. When we worked together in Ottawa, there were days when he did things in training that blew everyone away. I have no doubt he will fulfill his potential in our environment.”

Reid was originally drafted by Major League Soccer’s FC Dallas in the second round of the 2017 MLS SuperDraft, while also signing a Generation Adidas contract with the league. Prior to joining MLS, Reid enjoyed success at ANB Futbol in League1 Ontario, scoring 20 goals in 20 matches as a 16 year old.

After not making any appearances for FC Dallas in the early half of the 2017 season, Reid would go on loan to USL Championship’s Ottawa Fury FC, who was coached by Paul Dalglish at the time. The Canadian winger made 12 appearances that season, while scoring one goal. His time at Ottawa in 2017 convinced the Fury to extend his loan through the 2018 USL Championship season. That season, Reid was able to gain more confidence racking up 29 league appearances while scoring four goals and recording one assists. Reid also played in four Canadian Championship matches in 2018, where Ottawa reached the semifinals. In that tournament, Reid recorded one assist.

Reid departed FC Dallas after the 2018 season and announced he would join Le Havre AC in January 2019. He made four appearances for Le Havre II, the club’s reserve side, during the 2019 season.

The winger has spent time with Canada’s youth national team, being invited in January 2018 to the U23 camp as they prepared for their qualifying matches for the 2020 Summer Olympics. Later that year, Reid was called up to the U20 national side that competed in the 2018 CONCACAF U-20 Championship. During that tournament, Reid made five appearances, scoring one goal and adding two assists.