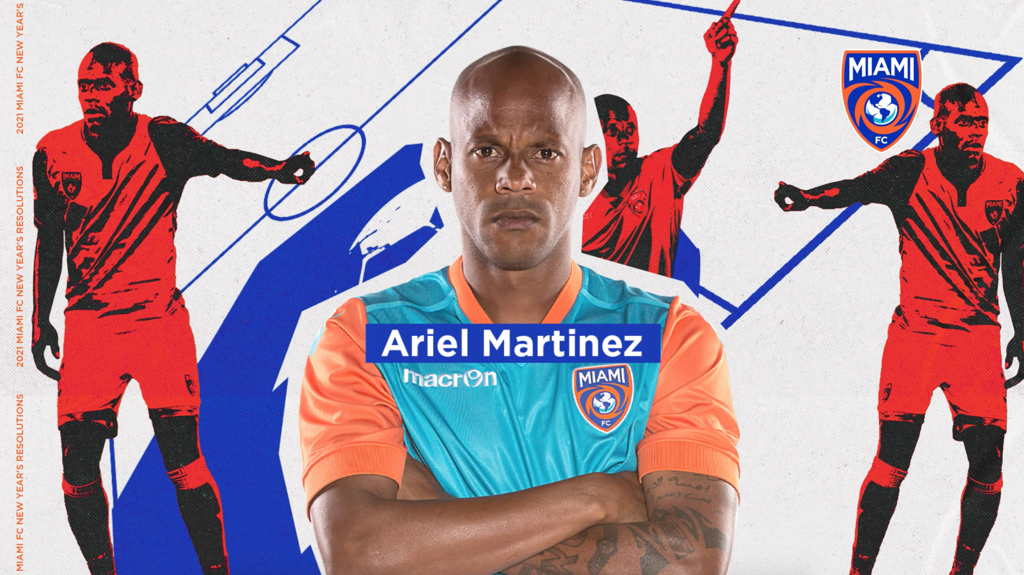 MIAMI (January 19, 2021) – The Miami FC announced on Tuesday that they have signed attacker Ariel Martinez, pending league and federation approval. This announcement marks the return of one of Miami FC’s most successful players, having played for the club from its inaugural 2016 season until the end of the 2019 season, winning nine trophies during that span.

“On a personal level, during my previous 2 years as a head coach Ariel was the heartbeat of the team,” said Technical Director and Head Coach Paul Dalglish. “We enjoyed success together, winning many trophies. In all honesty it hurt me to see him playing for someone else last year. I am delighted to welcome him home. From a team perspective, we have work tirelessly to identify and recruit the ideal player profiles to play the Miami FC way. We are really happy with where the roster is but we needed somebody to bring everything together. Ariel is the conductor of our orchestra.”

Born in Sancti Spíritus, Cuba, Martinez joined The Miami FC ahead of the 2016 North American Soccer League season after spending the 2015 season with USL Championship’s Charleston Battery. His four seasons at Miami FC saw him be a part of all nine trophies the club has won, while scoring 23 goals and adding 16 assists to his name. Prior to his departure after the 2019 season, Martinez was coming off a great season with Miami FC, scoring nine goals and recording six assists. His performances led the club to a NISA Eastern Conference Championship, which was the club’s fourth trophy that season.

In 2020, Martinez joined FC Tulsa of the USL Championship’s Western Conference. During his time there, Martinez featured in all 15 regular season matches where he scores two goals and recorded three assists. His leadership from day 1 since joining Tulsa earned him the respect of his coaches and teammates, ultimately giving him the captain’s armband in his only season with Tulsa. The club would finish second in Group D with a record of 6-7-2 (W-D-L), earning them a spot in the USL Championship Playoffs. Tulsa would bow out in the first round, losing to El Paso Locomotive on penalties.

At 34 years old, Martinez has had incredible success at the national team level, recording 54 caps with the Cuban Men’s National Team. Martinez featured for Cuba from 2006 until 2015, scoring 11 goals and recording two assists. He played a crucial role in Cuba’s 2012 Caribbean Cup championship run. A year later, he had another set of prolific appearances for Cuba in the 2013 Gold Cup, this time leading the nation to a Quarterfinal appearance.

Miami FC continues to bolster its 2021 USL Championship roster as the season approaches. As of Jan. 19, 2021, the roster is as follows: