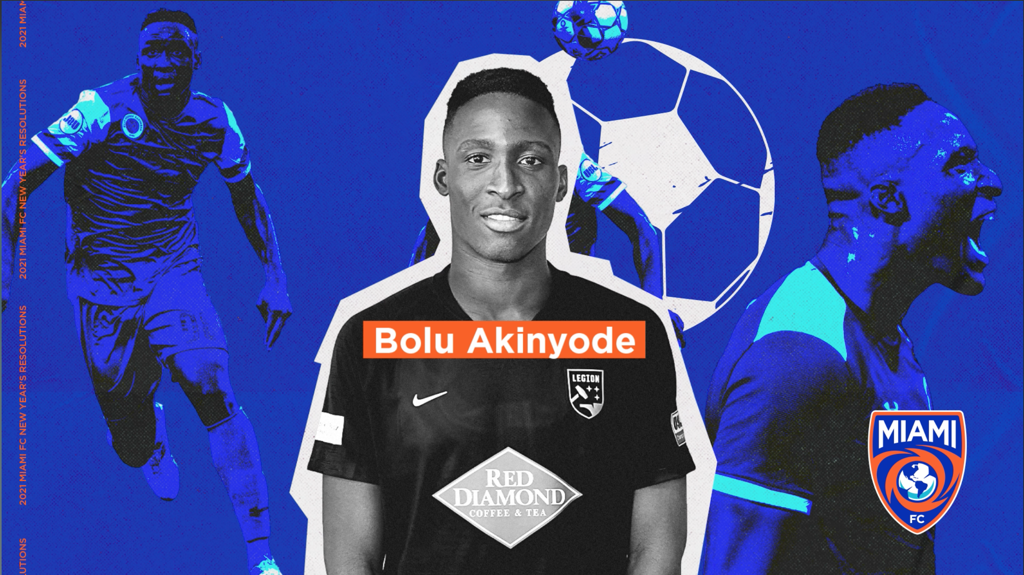 MIAMI (January 15, 2021) – The Miami FC announced on Friday that the club has acquired midfielder Bolu Akinyode from Birmingham Legion FC for an undisclosed fee, pending league and federation approval.

“First, I would like to thank Jay Heaps at Birmingham for working with us to get this deal over the line,” mentioned Technical Director and Head Coach Paul Dalglish. “We wrote player profiles before we started recruiting our roster and then used data and analytics to source the best options in each position. Quite simply, there is not another player like him in the USL, so we reached out to Birmingham to see if we could get a deal agreed upon. Defensively, he is the best midfielder in the league and being left footed he gives us lovely balance. He is the ideal player profile to play his role in our game model.”

Akinyode joins Miami after spending last season with USL Championship’s Birmingham Legion FC. Originally from Lagos, Nigeria, Akinyode came to the United States at the age of 16 to join the New York Red Bulls Academy prior to going on to play collegiately for Stetson Hall University. During his four years at Stetson Hall, Akinyode appeared regularly for Red Bulls U23, and would later go on to officially signed with Red Bulls II in 2015.

After a successful rookie year at Red Bulls II, he signed with Philladelphia Union II (formerly known as Bethlehem Steel) where he would appear in 26 league matches. His performances led him to get picked up by North Carolina FC (formerly Carolina RailHawks) in 2017.

Akinyode’s talent caught the eyes of Nashville SC in 2018, signing him in their inaugural USL Championship Season. In his two seasons in Nashville, the Nigerian was one of the bright spots on Nashville’s roster, playing in 64 league and five U.S. Open Cup matches. He was consistently selected in the starting eleven, while being in the top five in minutes played for the club in both seasons.

Most recently, Akinyode spent the 2020 USL Championship season with Eastern Conference rival Birmingham Legion. The defensive midfielder played in 16 league matches, while once again being in the top five outfield players with most minutes on the roster. His 90.4% success rate in passes was one of the club’s highest, helping Birmingham reach the Eastern Conference Quarterfinals, where they would be unable to defeat the Tampa Bay Rowdies.