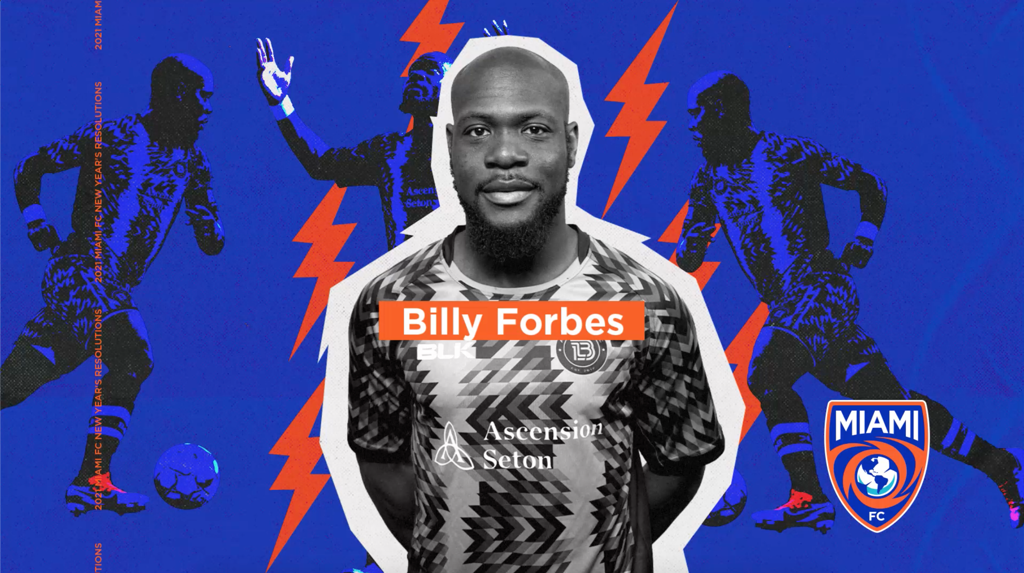 MIAMI (January 11, 2021) – The Miami FC have secured the talents of Turks and Caicos international Billy Forbes, the club announced on Monday, pending League and Federation approval. Forbes spent the 2020 USL Championship Season with Western Conference’s Austin Bold and brings a wealth of experience, which includes over 180 appearances as a professional in the U.S.

“Billy is the perfect player profile to play in our system,” said Technical Director and Head Coach Paul Dalglish. “He has excellent movement, is left-footed, fantastic ability to play 1v1 and a really good finisher. We are excited to welcome one of the elite wide forwards in the USL Championship to Miami.”

The 30 year-old winger is coming off one of his best seasons yet, starting in 15 out of 16 matches, while scoring 7 goals for the Bold. Forbes made appearances in all of Austin’s matches, playing a total of 1,276 minutes. Prior to joining Austin, Forbes spent the 2019 season with in-state rival San Antonio FC, which was his second stint with the club. The winger made 23 appearances for San Antonio, while making 15 starts. Forbes scored three goals and added three assists in 2019. That same year, Forbes made four appearances for the Turks and Caicos Senior Men’s National Team, scoring five goals in their CONCACAF Nations League participation.

Forbes’ 2018 season saw him reach the USL Championship Final while playing with Phoenix Rising FC, which featured Chelsea legend Didier Drogba. He featured in 24 matches, starting in 11 of them, while adding another three goals and three assists. Forbes would come on in the second half of the USL Championship Final, which Phoenix would lose to Louisville City FC. That night he face “Speedy” Williams, who will now be his teammate at Miami FC.

The winger’s most successful individual season of his career came in 2017, when he earned a spot in the USL All-League Second Team. That year he scored ten goals and added eight assists in 31 regular season matches. Forbes’ performances helped San Antonio make it to the Western Conference Semifinals in their second season in the USL.

Forbes’ career began with Turks and Caicos’ Provopool Celtic, but he would quickly bring his talents to the United States, where he played collegiate soccer at Western Texas College and Lubbock Christian University from 2009-2012. He would go on to make appearances for USL League Two sides Mississipi Brilla and WV King’s Warriors in 2012 and 2013 respectively before signing with North American Soccer League’s San Antonio Scorpions in 2014.

In his first season as a pro, Forbes helped the team win the NASL Championship, scoring five goals in 23 league matches. Forbes spent the 2015 side with San Antonio once again, scoring another five goals and recording eight assists in 27 matches. His final season in the NASL came with Rayo OKC in 2016, where he netted three goals and three assists.

His international experience includes 13 caps with Turks and Caicos, including FIFA World Cup Qualifiers for the 2010, 2014 and 2018 editions, and most recently CONCACAF Nations League matches.

Miami FC’s roster continues to grow with the additions of Billy Forbes. Below you will find the roster as of Monday, January 11: