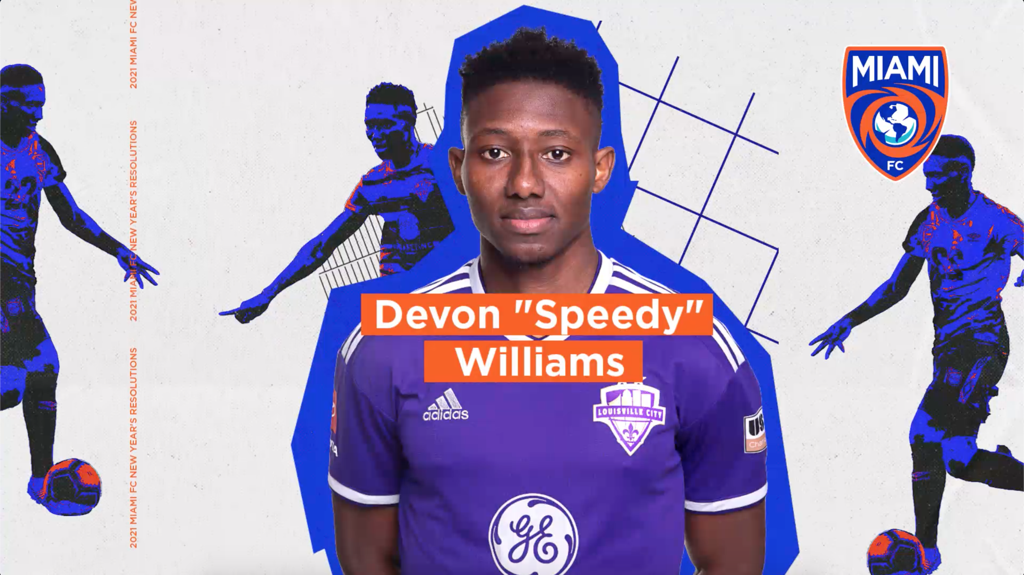 The Jamaican midfielder comes to South Florida after spending four seasons with Louisville City FC, including the 2020 season where he was named to the USL Championship All-League First Team. “Speedy” Williams brings three Championship titles with him to Miami, winning in 2016 with New York Red Bulls II and then with Louisville in 2017 and 2018. He also won an Eastern Conference Title in 2019 with Louisville.

“In my opinion Speedy is the best player of his kind in the USL,” said Technical Director and Head Coach Paul Dalglish. “He is incredibly mobile, defensively excellent and a magician with the ball. Furthermore, he is a proven winner having won three USL championships. A winner culture is created by the people you have at the club and this is another player that has the correct mentality to play here.”

Leading Louisville in minutes played in 2020, Williams featured in all 19 matches, helping them reach the Eastern Conference Final of the Championship Playoffs. The 28-year-old posted impressive individual stats including leading the league in most completed passes (831) and finishing second among outfield players in recoveries (141). With his 19 appearances in 2020, Williams now has played in over 140 USL Championship matches, bringing a wealth of experience to Riccardo Silva Stadium.

In 2019, the Jamaican international not only featured in 30 league matches, but also added six appearances with his senior national team. A prolific 2019 season, where he captained Louisville City, would culminate with yet another USL Championship Final appearance, this time losing to Real Monarchs SLC.

Miami FC continues to strengthen its roster for the 2021 USL Championship season, which will be the club’s second year in the league. As of now the club roster has the following players: