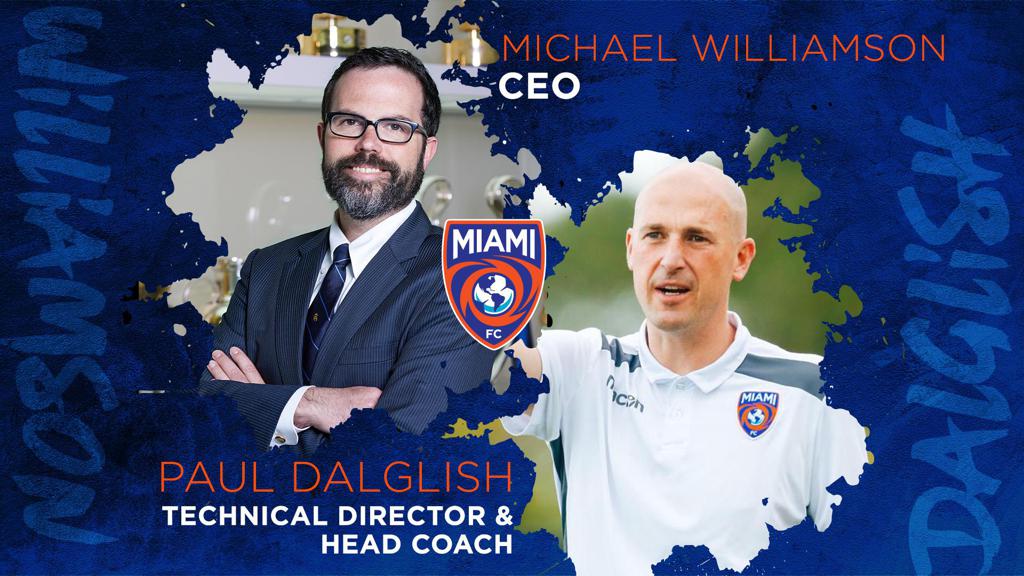 MIAMI (October 15, 2020) – The Miami FC announced on Thursday that the club has appointed former Inter Milan and D.C. United Executive Michael Williamson as Chief Executive Officer, while Paul Dalglish has been named Technical Director and Head Coach. These appointments reinforce the club’s long-term strategy for success both on and off the pitch, while continuing its commitment to the Miami Community.

“Michael is a fantastic appointment as the new CEO of Miami FC,” said Miami FC Owner Riccardo Silva. “He brings to the club a wealth of expertise and experience, not just at the highest levels of soccer in Europe, but in U.S. soccer too given his successful tenure at D.C. United. With Paul leading the club on the technical side, I am sure that Miami FC’s exciting playing style and its winning ways will continue. Miami is a passionate soccer city and as the only professional soccer team playing in Miami, Miami FC undoubtedly has its best years ahead of it. I wish Michael and Paul the very best of luck in their new roles.”

“I would like to thank Riccardo Silva for trusting me to take the reins of this amazing club,” said Williamson. “I know how successful Miami FC has been since they took the field in 2016, and my goal is to continue that trend on and off the pitch. I want to use my experience to help further build the culture Miami Football Club has already established, while developing new and exciting ways to connect with our fans, partners, and this amazing Miami Community.”

As CEO, Williamson will be overseeing the strategic direction of the club, with the focus of developing and strengthening Miami FC’s roots in the community. Williamson will work alongside newly appointed Technical Director and Head Coach Paul Dalglish to make sure the success off the field can be replicated on the pitch at Riccardo Silva Stadium.

Dalglish started the 2020 season as General Manager of the club, but in August was called to take upon the role of Head Coach for the remainder of the USL Championship season. Miami FC finished the season with back-to-back wins against their Group H opponents, including a victory over Eastern Conference semifinalist Charleston Battery.

“To bring in someone with Michael’s experience is a clear statement of intent from Riccardo and where he wants to take this club,” commented Dalglish. “I have met Michael and our goals and vision go hand-in-hand. His experience speaks for itself, and it will allow me to focus on my area of expertise which is what happens on the pitch. Miami FC has a way of playing, which is attack-minded football, and it’s my responsibility to bring that to Riccardo Silva Stadium for the years to come.”

About Michael Williamson
Williamson joins Miami FC after a successful tenure with Serie A’s Inter Milan, where he served as Chief Financial Officer, Chief Strategy Officer and Corporate Director during his time there.

Williamson started at the Italian club as the right-hand person of Inter Milan’s former President. His duties included overseeing the hiring of top club executives, being the representative at Serie A Assemblies, managing all relations with UEFA and other football authorities, being actively involved in the player transfer market working alongside the sporting director and head coach, and restructuring the club’s debt.

In 2017, Williamson would be named as the club’s Chief Strategy Officer, while also serving as Co-CEO of Mi Stadio S.r.l, a joint venture company held between Inter and AC Milan for the management of the San Siro Stadium. As CSO, he was responsible for all key strategic initiatives of the club, including the planning and design of a new training center, redevelopment of the San Siro Stadium, the implementation of a club-wide digital transformation, and the creation of a sports analysis system.

Prior to joining Inter Milan, Williamson was the CFO (2007-2012) and COO (2012-2014) for Major League Soccer’s D.C. United. Along with managing all business units from technical and team operations to commercial and marketing, Williamson was also on the forefront of the negotiation to bring a new soccer-specific stadium to the District of Columbia region.

About Paul Dalglish
The son of legendary Scotland international, Celtic and Liverpool forward Kenny Dalglish, Paul enjoyed a successful playing career through the ranks of the Premier League and the Scottish Premiership before heading to the MLS in 2006. He won the MLS Cup twice with the Houston Dynamo in both of his seasons with the club, in 2006 and 2007.