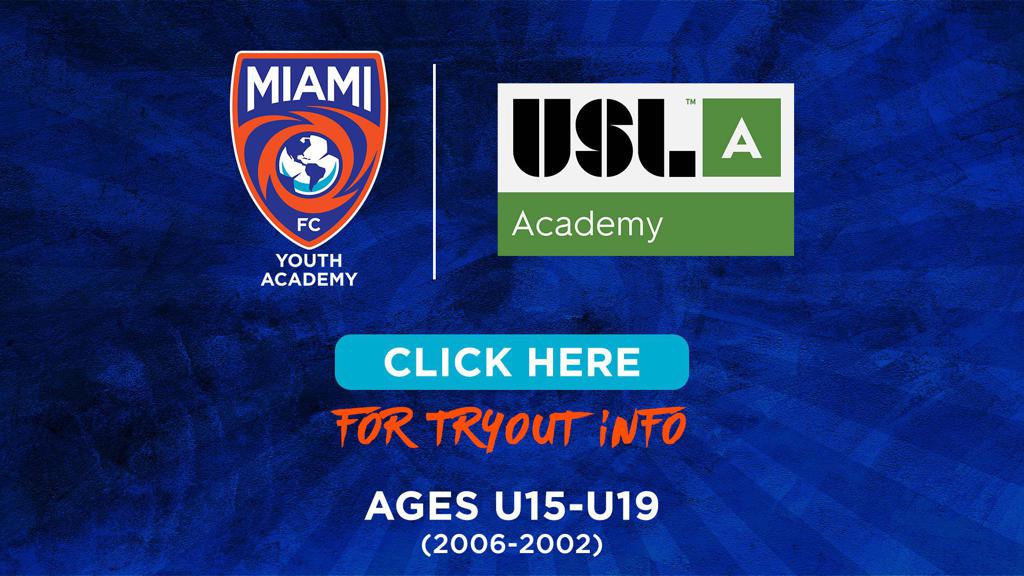 MIAMI (September 10, 2020) – The Miami FC Youth Academy announced on Thursday, their intent to join the USL Academy League, which is set to launch early 2021.

MFCYA will be hosting an invitational tryout for the USL Academy League team later in September at Tamiami Park. To sign up for more information about tryouts, click here.

Unique to any other pre-professional set-up in the United States, USL Academy League teams will field a single elite youth team, geared towards top local players within the U15 to U19 age range, and built with a direct connection to the club’s First Team.

“Since we began our journey with the Miami FC Youth Academy almost two years ago, our main priority was to find a platform to showcase the level of the players,” explained Miami FC Youth Academy President of the Board Paul Dalglish. “South Florida is known for having some of the best fútbol talent in the country, and we are hoping to be able to give our community a platform to showcase that. There is no better way for our youth players to showcase their talents than to use the USL Academy League as a platform. It will help us develop players, with the ultimate goal of bringing them to train and hopefully play with our First Team.”

With the goal of providing a new professional pathway for youth players in USL communities across the country, the first-of-its-kind pre-professional league will align with the United States’ professional calendar, complement existing local youth organizations and allow players extensive access to the First Team.

With over 140 senior clubs throughout the Championship, League One and League Two levels of the United Soccer League structure, young players in America now have more opportunities to play professional soccer than ever before.

“This is an exciting time to be an academy player at Miami FC,” said Miami FC Youth Academy Executive Director Nelson Vargas. “Participating in the USL Academy League will be an amazing platform for our youth players to participate in, while also growing as athletes. This will give us a unique opportunity to compete against other teams at a national level, while showcasing our First Team methodology at the youth level.”

The Miami FC Youth Academy will look to give players a place in a USL Academy League squad, which will be earned by excelling within a club’s youth network. There, they can go up against top players and teams in the next stage of their development, helping their team to success on the field and proving their readiness for the next step.

To learn more about the USL Academy league and its benefits, click here.

ABOUT THE MIAMI FC YOUTH ACADEMY
The Miami FC announced the launch of its new Youth Academy Program at Tamiami Park in December 2018. As a further demonstration of the club’s continued commitment to soccer in Miami, The Miami FC Youth Soccer Academy is dedicated to increasing opportunities for youth soccer players in South Florida to develop their skills and knowledge of the game.

Located in close proximity to Riccardo Silva Stadium at Florida International University, The Miami FC Youth Soccer Academy offers one of the best values in Miami when it comes down to youth soccer, while also providing a competitive environment for all skill levels.

In the heart of Miami, The Miami FC Youth Academy is a place where the primary objective is to grow your love for the sport of fútbol. From Path2Pro to the USL Academy League, MFCYA is committed to establishing programs to help you grow as an athlete year-after-year.

The Miami FC Youth Academy offers competitive programs for ages 8-19 for Boys and U15-17 for Girls.

Not only will you learn from licensed coaches, but you will also have the opportunity to be coached by Miami FC First Team professional players, who are eager to share their knowledge of the sport, but also share their career experiences to further develop you in and off the pitch.

This is your Community’s Academy. This is Miami’s Academy.