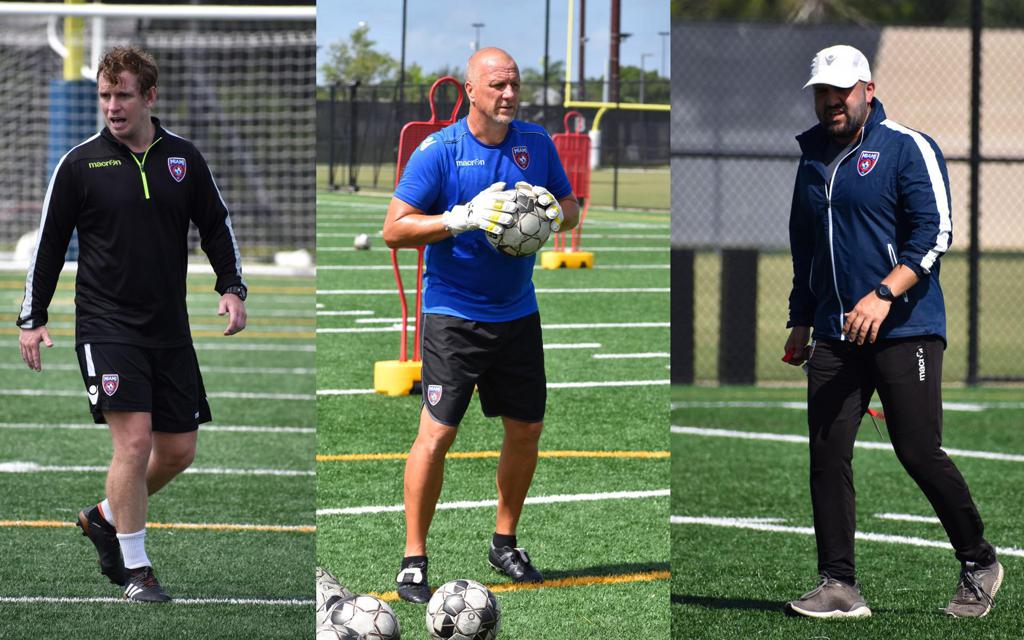 MIAMI (June 25, 2020) – The Miami FC announced on Thursday that First Team Assistant Coaches Paul Crichton, Chris Spendlove and Anthony Hazelwood have all been named Technical Directors of the Youth Academy. The addition of the three is yet another monumental step in supporting the club’s investment in their academy system at Tamiami Park, located in the heart of Miami.

As Technical Directors, all three will have a massive involvement in the implementation of the Youth Academy’s curriculum, which will be designed to follow the First Team methodology and playing style. In addition to their extensive careers in football, all three coaches hold USSF A-Licenses.

All three will also be heavily involved in educating and developing the current Youth Academy coaches, with the ultimate goal of helping develop their careers.

“To be able to add three A-Licensed coaches shows Miami FC’s determination and drive to provide the best possible education for our youth players,” said President and General Manager Paul Dalglish. “All three of them have a tremendous work ethic with the First Team and they will help us take the Academy to another level. Actions speak louder than words and this is a statement of intent which showcases our mission of providing path-to-pro for our players, while allowing them to fulfill their dreams. This is a club which is built for our Miami Community.”

Prior to coming to the United States several years ago to continue his coaching career, Crichton enjoyed a successful playing career which spanned over 20 season in England’s top football leagues, including the Premier League. The experienced English goalkeeper played for clubs such as Norwich City, Doncaster Rovers, Grimsby Town, Burnley and Notts County. After several coaching stints in the U.K., Crichton moved to the United States to continue his career. During his time in Florida, the USSF A-Licensed coach was involved in youth football at the world-renowned IMG Academy, PSA Soccer Academy and Southeast Volusia Soccer Club. Crichton has been an assistant coach at The Miami FC since the start of the 2019 season.

Spendlove, originally from Liverpool, England, came over to the United States in 2007, playing collegiately for Oklahoma City University. During his college career, the former defender played in the USL PDL (now USL League Two) for the Austin Aztex and GPS Portland Phoenix. After finishing his studies, Spendlove went on to play professionally for Wilmington Hammerheads and OKC Energy, retiring in 2013.Prior to joining Miami FC ahead of the 2020 season, Spendlove was an assistant coach at USL Championship clubs OKC Energy (2014-2017) and Hartford Athletic (2019)

Hazelwood joined the Miami FC in January 2019 as an Assistant Soccer and Sports Performance Coach. He currently holds a USSF "A" coaching license, an MSc in Sports Training and Nutrition from the Universidad Europea de Madrid (UEM), and a Master's in International Sports Management with the Johan Cruyff Institute. During his time in Spain, he took part in coaching internships with Real Madrid, the Getafe SAD CF U-18s and the Levante UD U17s. Presently, he is a grassroots coach educator with the US Soccer Federation and FYSA. Previously, he was an academy sports performance and assistant soccer coach with the Seattle Sounders. Along with his Technical Director role, Hazelwood will oversee and develop the Academy’s sports performance program at all age levels.

The Miami FC Youth Academy offers one of the best values in Miami when it comes down to youth soccer, while also providing a competitive environment for all skill levels.

In the heart of Miami, The Miami FC Youth Academy is a place where the primary objective is to grow your love for the sport of fútbol. From Path2Pro to the USL Academy, MFCYA is committed to establishing programs to help you grow as an athlete year-after-year.

The Miami FC Youth Academy offers competitive programs for ages 8-19 for both Boys and Girls.

By joining the MFCYA, all players will have the opportunity to be coached by Miami FC First Team professional players, who are eager to share their knowledge of the sport, but also share their career experiences to further develop you in and off the pitch.